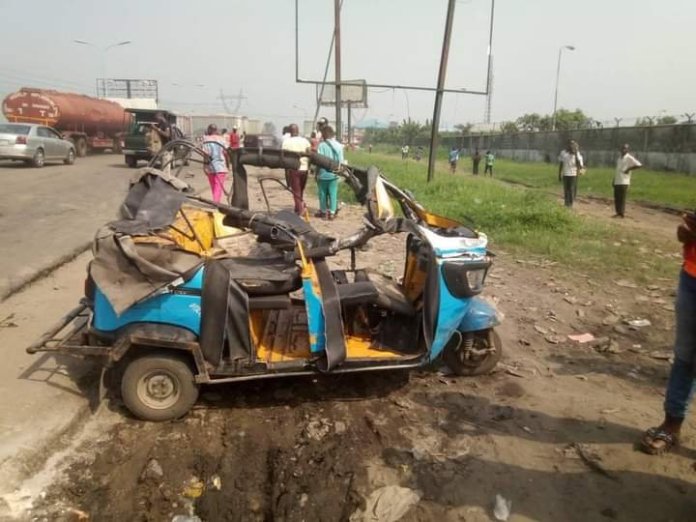 The Delta State Police Command has distanced itself from the ugly incident, which claimed the lives of a nursing mother and her daughter in Warri on Wednesday, January 20, 2021.

The Police was earlier accused of stirring the event which led to the accident, as it was alleged that a Police Van from Ebrumede Division reportedly hit a tricycle conveying mother and child, killing both while chasing suspected yahoo boys. The Police Van was however later set ablaze.

In a press release by the command signed by its Public Relations Officer, DSP Onome Onovwakpoyeya explained that the Police was not involved in the unfortunate incident that led to the death of a woman and a child.

The statement sent to this medium read that, “the Delta State Police Command wish to put the records straight in respect of the ugly incident that occurred today being 20/1/2021 at about 13:40hrs along PTI Express Way in Effurun, Uvwie LGA of Delta State where a multiple fatal motor/tricycle accident occurred.

“The accident involved a Mercedes Tipper with Reg. No. WWR 425 ZR loaded with granite, a Toyota Camry car with Reg. No. AKD 403 FM and a Tricycle Reg. No. yet unknown, all moving in the same direction and Police vehicle was never involved. Two passengers conveyed by the Tricycle a woman and a baby girl died on the spot and other passengers were injured.

“The Delta State Police Command deeply sympathizes with the families of the deceased and the injured persons and equally frowns at the unjust treatment meted to Police officers who went to rescue the victims by members of the public, they went as far as burning the Police patrol vehicle that came for the rescue operation. The Perpetrators of this dastardly act will be brought to book.

“The Command also wishes to inform the general public that neither Operation Delta Hawk nor Ebrumede patrol vehicle was involved as speculated earlier.” the Police explained.

Meanwhile, the state Governor, Senator Ifeanyi Okowa has ordered immediate investigation into the death of a woman and her daughter in Warri on Wednesday.

In a statement by his Chief Press Secretary, Mr Olisa Ifeajika, in Asaba, the governor decried the incident, and charged police authorities in the state to commence urgent and accelerated investigation into the circumstances surrounding the losses.

According to him, the sad news of the death of a woman and her daughter in a rather bizarre circumstance in Warri on Wednesday is quite unfortunate and disheartening.

Okowa condoled with the deceased’s family on the loss of their loved ones, and assured that everyone involved in the processes that led to the incident would be brought to book.

He called on Deltans, especially the people of Warri to remain calm and law-abiding, and allow the government and law enforcement agencies to take necessary steps to address the situation.

The governor also charged the police to ensure that law and order prevailed in the area.

Niger-Delta Peace Group Elects New Exco, Assures Expatriates of Safety
I Will Continue to Identify With My Constituents – Ochor