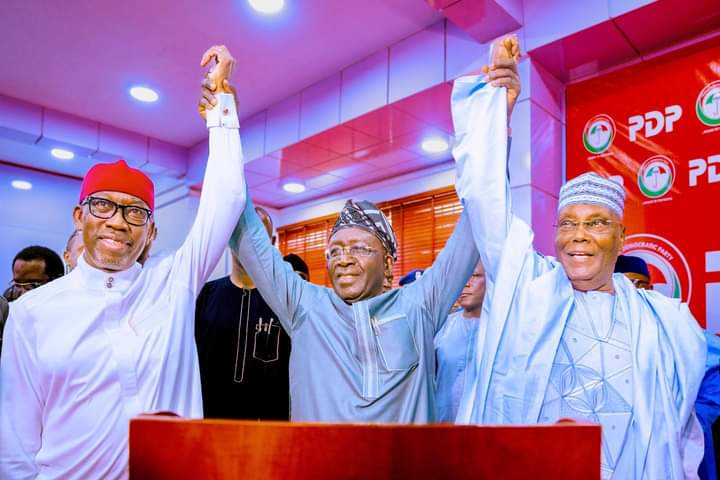 The Chairman, Kome Support Group, Chief Oghenekome Okpobor has congratulated the Executive Governor of Delta State, His Excellency, Sen. (Dr) Ifeanyi Okowa, on his emergence as running mate to the Peoples Democratic Party’s Presidential candidate, His Excellency, Alhaji Atiku Abubakar, former Vice President of the Federal Republic of Nigeria and the Waziri of Adamawa.

In a statement made available to newsmen and personally signed by him, Chief Kome stated that given the exigencies of the moment, the choice could not have been better especially as the party is currently positioning itself to wrestle power from the present administration which has caused untold hardship and pain to Nigerians.

“After our Party’s presidential primaries, the onerous task that was before our candidate was to choose a competent running mate who understands the dynamics of Nigeria politics and economy. He needed a man with such pedigree as Sen.(Dr) Ifeanyi Okowa who enjoys the goodwill of the people and has a sound understanding of the times and seasons that we are in as a nation.

Our candidate needed someone who is competent enough to stir the economic affairs of our nation while acting as a dependable stand gap between the executive and the legislative arm of government. Senator Okowa fits perfectly into that position having served as a Senator and is currently managing a complex state like Delta”.

He further stated that those who feel otherwise about his acceptance of his nomination are either being malicious or deliberately shying away from the realities of the times.

“Of course there are those who feel that the governor should have declined the nomination. Such people do not understand the times we are in. We would certainly have preferred a Southern Presidency but the realities and facts on ground do not support such agitation. So those who have deliberately resigned themselves from the truth are the real enemies of our people and should desist forthwith. The task ahead calls for effective collaboration and closing of ranks among all stakeholders”.

Continuing, Chief Kome stated that from the very beginning, he elected himself to be a political son and student of the governor because of his deep understanding of the politics of the day and his large heart for the welfare of the people and would continue to remain loyal to his person.

“From the onset, I have always known His Excellency to be a man of rich understanding of the political terrain and filled with the fear of God and love for the people, hence my unalloyed loyalty to his person and government. I know he is deeply committed to improving the lives of the people, thus I will remain loyal to him and his aspirations”.

Chief Kome Okpobor further called on every well meaning Nigerians to join forces with the Atikulated team to rescue Nigeria from the deteriorating abyss the APC government has placed the nation.