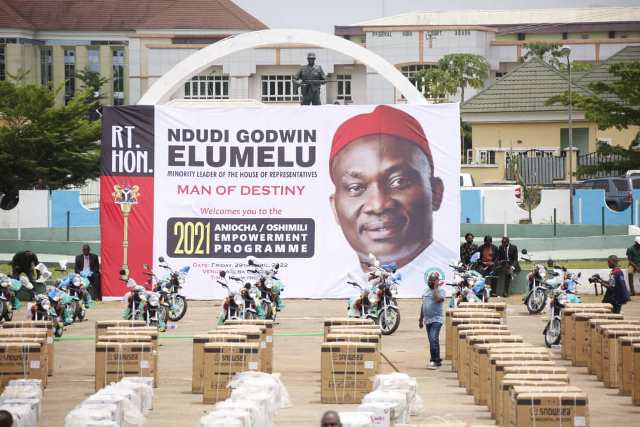 The National Chairman of the Peoples Democratic Party (PDP), Senator Dr. Iyorchia Ayu has applauded the Minority leader of the House of Representatives, Rt. Hon. Ndudi Elumelu for his outstanding contributions towards human capital development of the people in his Aniocha/Oshimili Federal constituency, saying that Delta State was very lucky to have such an outstanding personality.

Speaking on Friday, April 29 at the 2021 edition of the Rt. Hon. Ndudi Elumelu’s empowerment programme for the people of his Federal Constituency, held at the Cenotaph, Asaba, Dr. Ayu acknowledged that Elumelu who represents Aniocha/Oshimili Federal Constituency in the House of Representatives had done well, even as he affirmed that the PDP was very proud of him.

While urging other representatives to replicate what Elumelu had done in their respective constituencies, the PDP National chairman urged politicians to place high premium on the welfare of citizens, especially the ordinary Nigerians. 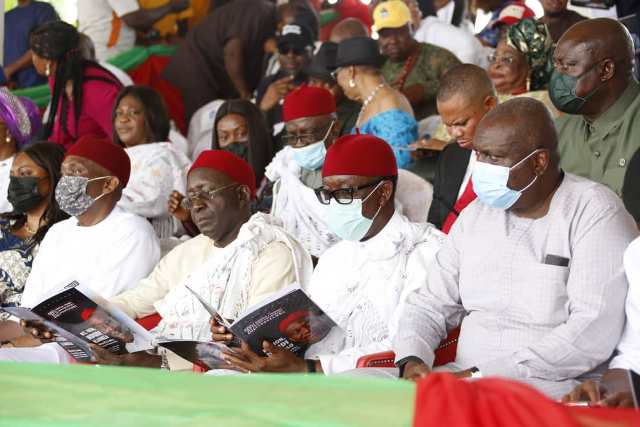 According to him, politicians should not forget the ordinary people because without them and the support of the people, they cannot be anything as far as politics is concerned.

“Delta State is very lucky to have such an outstanding personality. Elumelu has done very well and the PDP is very proud of him.

“If all our representatives across the country do this in their respective constituencies, it will help the party a great deal.

“What Elumelu is doing will enormously support the efforts that our governor, Senator Ifeanyi Okowa, is putting for his people.

“I congratulate him for the concern he has shown to our people. I urge all politicians not to forget the ordinary people because without them and the support of our people, we cannot be anything as far as politics is concerned.

“It is only their support that makes it possible for us to win elections as a party and for us to continue to be the big men that people say we are. You can’t be a big man without a small man. 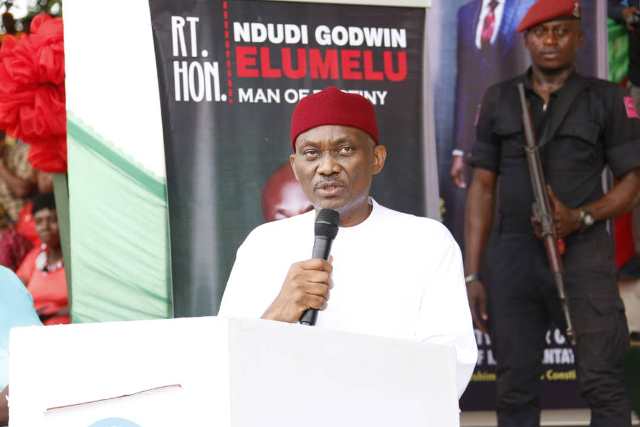 Hon Ndudi Elumelu speaking at his 2021 Empowerment Programme held on Friday, April 29, 2022 at the Cenotaph, Asaba

“Therefore, l will be very happy to campaign for any candidate who show concern for the ordinary people because our party, the PDP, was formed for the people with umbrella as its symbol,” he said.

Ayu thanked the lawmaker for his contributions to PDP, adding, “I thank you for looking after the ordinary people of the PDP family and l urge everybody who is elected whether as a member of the National Assembly, State House of Assembly or as a councillor; if you cannot help a 100 people, try to help at least one to five persons.”

In his remarks, Governor Ifeanyi Okowa noted that Rt. Hon. Elumelu was doing great wonders in his representation of his constituents, adding that the event was not the first time he was empowering the people in the constituency.

According to the governor, it is important that people continue to realise that when you find yourself in privileged position, you must honour people because it is through the votes of the people that we find ourselves in wherever we are as elected officials.

“I thank God for your life. Last year, l spoke glowingly of what you had done; today, it appears to me that you have even surpassed what you did last year; may God continue to empower you.

“There is no doubt that anything that is done to engage every youth, every man or every woman in Delta State and to support them to succeed in life, such a person that does that is helping the government of Delta State to reach out.

“You are aware that we have had several entrepreneurship programmes in Delta State, so anybody who complements that effort is high in our mind and l want to congratulate you with what we have seen here, today,” he said.

Congratulating Hon. Elumelu for his sterling contributions to the growth and development of humanity, Okowa urged the beneficiaries of the empowerment programme to make good use of the items given to them, stressing that they should continue to find a way to reach out to others. 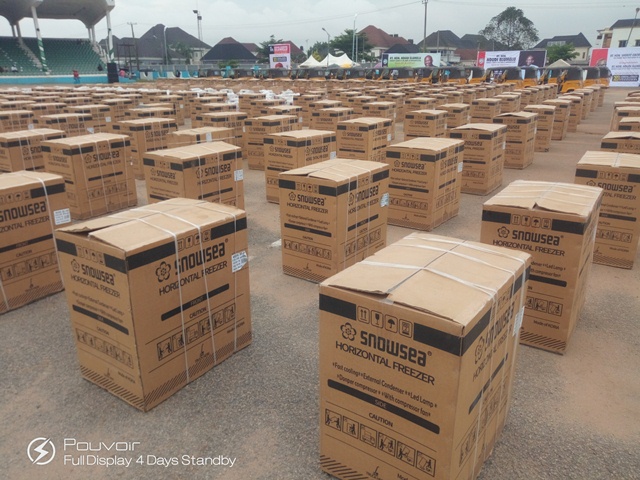 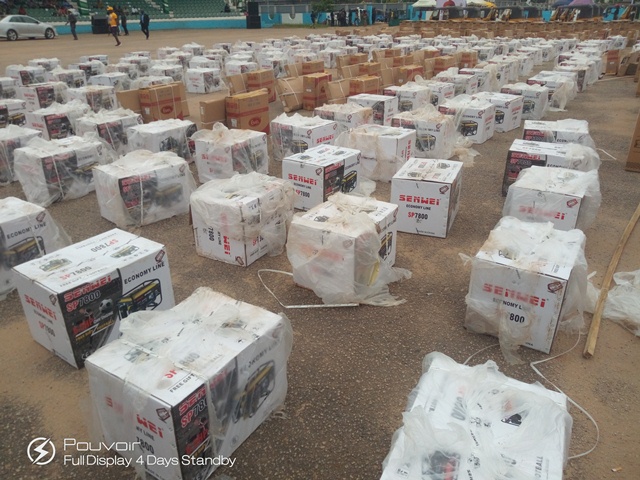 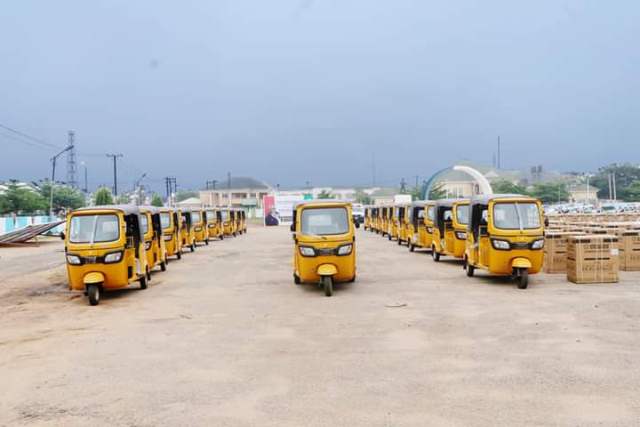 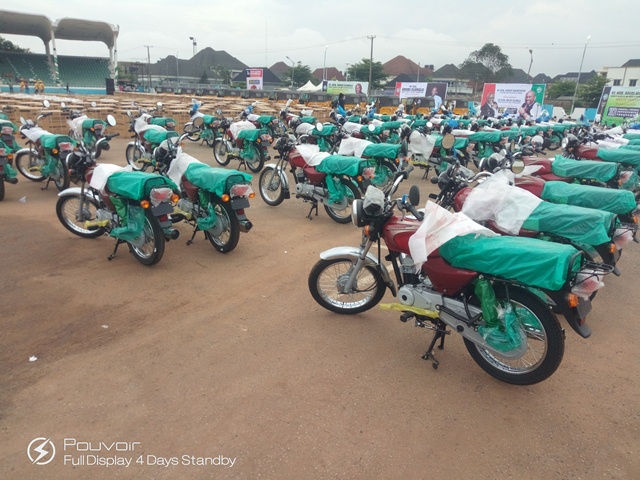 “It does not take only the rich to bless others, in your own very little ways, you can also bless others and bless a fellow party member. It helps us to grow as a people.

“In our individual ways, whether you are a councillor, you are a supervisory councilor, you are a vice chairman, a local government council chairman, you are a member of House of Assembly, you in the National Assembly, you are a governor or deputy governor, wherever you find yourself as an elected official, help somebody and all of us in a privileged appointment should find somebody to help.

“By the time we find one, two, three or four persons to help individually, we would have had a multiplier effect and it will be good for our nation, Nigeria,” the governor added.

Earlier, Elumelu had said that the programme was part of measures to give sense of belonging to men, women and youths of his constituency.

He used the forum to give a score card of his representation in the area of wealth creation, security, health and physical infrastructure.

“This is in addition to the provision of 820 stands of solar lights across the communities in the four Local Government Areas in Aniocha/Oshimili Federal Constituency, rehabilitation of Government Hospital, Onicha-olona, construction of 20 flats staff quarters as well as clinic for the Department of State Services (DSS), renovation of DSS office and premises in Issele-uku, renovation of Police stations across the four LGA’s in the Federal Constituency and construction of befitting palaces for our revered traditional rulers.

“Further to this is the empowerment of over 2,300 beneficiaries, including through direct employment of over 150 constituents as Personal Assistants (PAs) on youth and women matters, job placements for over 40 beneficiaries in Federal Government ministries, agencies and departments and over 1,375 beneficiaries empowered through various financial interventions.

“This is in addition to the training of 200 youths and women in cassava and rice production, after which starter packs were given to them as well as the 456 beneficiaries of 107 tricycles, 148 motorcycle, 111 electricity generating sets and 90 deep freezers worth over N300 million.

“Mr. Chairman, it may interest you to know that in line with your belief in the deepening of leadership capacity, which you demonstrated upon being sworn in, I sponsored a four-day capacity building workshop in Abuja, for Chairmen and Vice Chairmen as well as 80 Councilors in the four Local Government of Aniocha/Oshimili Federal Constituency their election.

“In keeping with my commitment to our people, we are again gathered here today for the formal presentation and distribution of more empowerment items in addition to numerous constituency projects to more communities under the 2021 programme.

“I am also delighted to inform you that under the 2021 intervention, various skill acquisition programmes were organized for which 300 beneficiaries will today receive N100,000 cash empowerment to finance their various vocations.

“I also attracted and executed various infrastructural projects for the wellbeing of our people. These include 400 more solar street lights for our communities, construction of more roads, drainages, boreholes, electricity projects and utilitarian townhalls, respectively in various communities including Ugbodu, Idumuje-Ugboko Issele-mkpitime, Nsukwa, Ukwu-nzu, Ezi as well as befitting palaces in Idumuje-unor and Obomkpa.

“This is in addition to the construction of another 28 flats (2 blocks of 14 one-bedroom apartments) for DSS officers, renovation of DSS office/quarters in Aniocha, renovation of Police stations and Police quarter including in Asaba, Isselu-uku, Ogwashi-uku, among others.

“Your Excellencies, you will observe that I deliberately left out the 2022 projects. However, work on most of the projects have reached advanced stages and will be unfolded at the appropriate time. Permit me to state that amongst them is the construction of Asaba Massacre Memorial Centre for which the Asagba of Asaba has graciously provided land as well as the Oko and Asaba Jetty for 8 numbers of 20 passengers’ boats respectively.

“May I with utmost respect thank our dear Governor Okowa, party leaders, my elders, the youths, women and all stakeholders for their support and encouragement towards my success story as the representative of our people in the National Assembly, particularly as the Minority Leader of the House of Representatives.

“I also thank all our leaders and entire people of Aniocha/Oshimili Federal Constituency for the confidence you have over the years reposed in me. I am grateful for your outpouring of goodwill to me during my consultative tours and particularly your resolve to renew my mandate to continue to represent you in the House of Representatives, come 2023. I do not take this for granted and I will never let you down.

“Mr. Chairman Sir, in Delta under the leadership of Governor Ifeanyi Okowa, PDP is alive and we are ready to follow you to rescue and rebuild Nigeria and if I may borrow your word sir “PDP is back”, Elumelu stated in his speech.