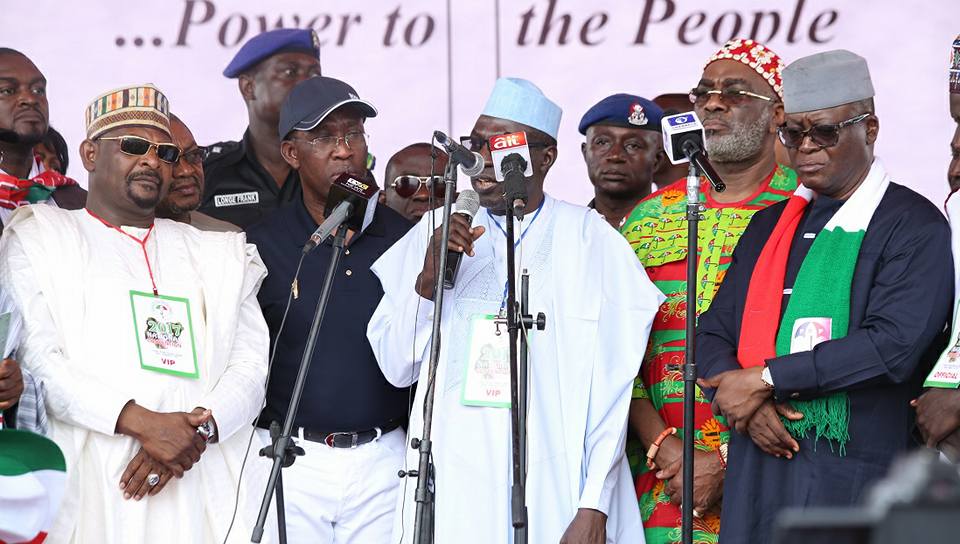 The Peoples Democratic Party (PDP) has extended the tenure of the Senator Ahmed Makarfi’s led Caretaker Committee for a period of four months at its Special Non-Elective National Convention held on Saturday, August 12, 2017 at the Eagle Square, Abuja, with Senator Ifeanyi Okowa, calling for introspection amongst members for further electoral victories.

The PDP Congress in its resolutions extended the tenure of the Senator Makarfi’s led National Caretaker Committee for another four months in a motion moved by Senate Minority Leader, Senator Godswill Akpabio and seconded by Dr Sule Lamido.

In a welcome address, Governor Okowa, Chairman Convention Planning Committee and Governor, Delta State, said that PDP needs to carry out self-examination so as to prepare to take over power from the ruling APC in 2019, stressing that Nigerians were desirous for the PDP to get its act together and play the role of a strong and vibrant opposition, which is critical for sustainable democracy in the country.

Governor Okowa Delivering His Speech at the Convention

“It is time for self re-examination and a return to do what is right. To build a solid team, we must be warm and inviting; the love for impunity and exclusion must cease. There must be integrity and discipline in our democratic system at all levels of party governance, and we must put to the fore those things that add value to the growth of our party”, Senator Okowa said, adding “We need to reaffirm our commitment to the democratic ideals of internal party democracy, sovereignty of the people, majority rule and minority rights, the rule of law and good governance, respect for civil and political rights, and inclusive participation of all in party administration”.

“As leaders we must read the times and take responsibility. We must condition our hearts for a new beginning. We must root out the past mistakes and model the right attitudes. As a party firmly anchored to the grassroots, connected to the people in a unique way that recognises that power truly belongs to the people, we must realise that there is a champion in each and everyone of us in the party, and that a collective leadership and partnership, resolved to do things right is all that we need to build the strength to recapture power.”, he said, assuring that “Nigerians have also had the opportunity of experiencing another party govern at the national level. They can now compare and contrast.”

He observed that the party failed to win in 2015 because internal democracy took a backstage while aggrieved party members were disregarded and impunity became the order of the day at various leadership levels in the party, stressing that “this wilderness experience however, has afforded us the rare opportunity to look inwards and do some soul searching, it has further refined us, sharpened us and made us stronger as we now know ourselves better, like the saying goes, sometimes it is better you have to go through the wilderness experience before you get to the Promised Land.”

Meanwhile, Former President, Goodluck Jonathan, at the Convention sent a strong warning to the President Muhammadu Buhari-led All Progressives Congress, APC, to never again intimidate the members of the opposition Peoples Democratic Party, PDP, or be ready for a showdown.

“I want to send a strong warning to the Buhari-led APC, never again to intimidate the PDP members, because the opposition party is ready to take over power. We wont be afraid of any intimidation.”

Jonathan who spoke amidst the cheering crowd, said that PDP during its sixteen years in power, was able to take Nigeria to a greater height.

“With PDP, there will be no more hunger, no poverty, no joblessness, because we have creative minds who can turn things around. I believe in PDP, and God also believes in PDP. I repeat, no PDP member should be intimidated, because we will resist it. God Is with us.”