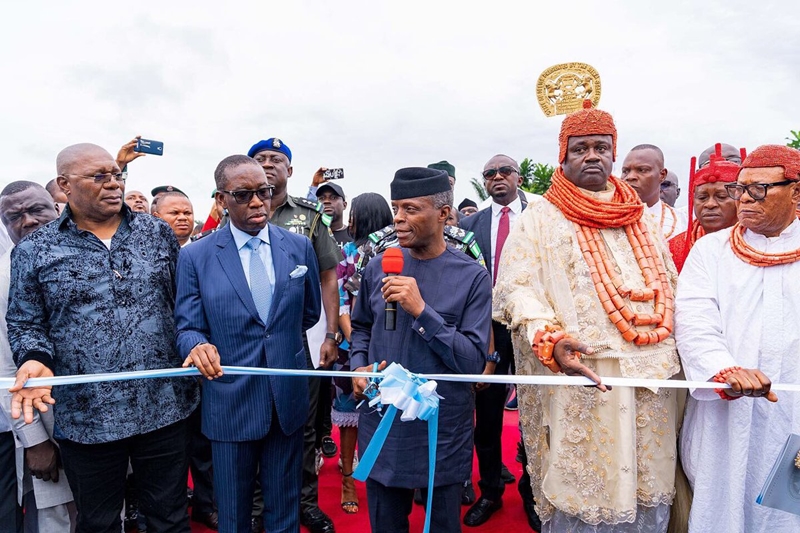 …As Okowa Promises To Do More For Stable Environment

“It is an honour to be here to visit you, the King of Gbaramatu Kingdom and commission road projects that were executed by Governor Okowa; I am very pleased that we are able to see this type of development in this axis and I commend Governor Okowa for his efforts,” the Vice President said.

He continued, “there is a lot of oil and gas in this area and the national assets have been protected; I thank you, Your Majesty for all that you have done to be able to achieve peace and prosperity in this kingdom.”

Prof. Osinbajo who was happy with the development strides of Governor Okowa in the creeks and other parts of Delta State, expressed sadness that the Niger Delta Development Commission (NDDC) and the Ministry of Niger Delta have not met with the yearnings and aspirations of the people in the riverine communities despite the huge funds allocated for the development of the area.

“The NDDC in many respect has not met the expectations of the oil producing states; a lot of money is invested in NDDC and the Ministry of Niger Delta because, the real reason they were created is to speed up the development of oil-rich communities,” he stated. While assuring that the Federal Government will do more to develop the Niger Delta in the next four years, the Vice President asserted, “we will sit with the Delta State Governor to look at specific areas to develop in the creeks.”

Governor Okowa in his speech, disclosed that the Vice President was invited to commission the projects because, he visited the creeks in the pursuit of peace and the enabling environment for oil and gas production.

At Ogulagha, Governor Okowa stated, “it is not just the length of the road that makes this project unique; it is that the road is located right beside the Atlantic Ocean with all the human, material, ecological and financial implications that this difficult terrain presents; we did not know we could get this length of road in the creak until the King drew our attention to it.”

“I am happy about the progress we have made so far; this has greatly helped to ensure peace in the State, which makes for uninterrupted oil production and the health of the national economy; we are continuing to use various structures and initiatives to ensure that the peace we have enjoyed in the last three years is sustained,” the governor said. The Ebenanaowei of Ogulagha Kingdom, HRH, Joseph Timiyan I in an address, said, “the Ogulagha Kingdom has several onshore and offshore oil and gas wells producing over 150, 000 barrels of crude oil per day, but, in spite of this great contributions to the economy of our country, we have never enjoyed the presence of both the federal and state governments through infrastructural development, appointments and training programs until 2015 when the current God-sent Governor, Senator Dr Ifeanyi Okowa came to our rescue with development and appointments of Special Assistants.”