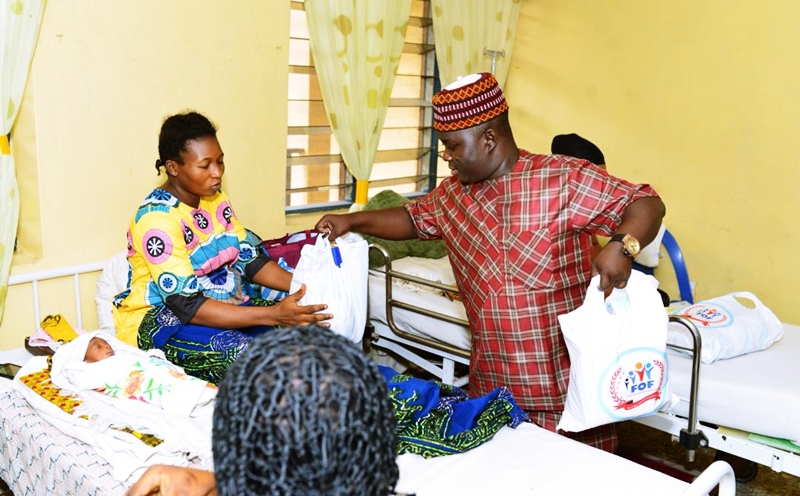 The Lawmaker who announced this on Monday, October 7, 2019 during a solidarity rally in his honor by the Ndokwa National Youth Movement, NNYM to mark his birthday anniversary, said the skills acquisition program is in line with his avowed commitments for women and youth empowerment as well as enhanced quality of lives in Ndokwa Nation.

Rt Hon Osanebi, a former Deputy Speaker of the House had as part of activities marking his birthday settled the medical bills of over 100 patients at St. Luke Hospital and Federal Medical Centre, both in Asaba, as well as distributed toiletries, groceries and drugs to patients at the two hospitals.

The Lawmaker who also visited some orphanages to distribute gift items, said there was no other better ways to celebrate his special day than putting smiles on the faces of others, particularly the under privileged.

Represented by Mr Prayer Pemu popularly known as Mc Orange, Osanebi noted that the the settlement of the medical bills and presentation of the items were in line with the vision of Friday Ossai Osanebi Foundation, established to make a difference in the society.

In their responses, the management and staff of the hospitals, thanked Osanebi for the kind gesture, noting that it was not the first time the Lawmaker was making such presentations, even as they prayed God to continue to blessing him and grant him longevity.

At the solidarity rally held across the three local government areas that made up the Ndokwa ethnic nationality, the youths numbering over two thousand marched through the streets, singing and dancing with various cultural groups to add colors to the event.

The National President of Ndokwa National Youth Movement, Comrade Benjamin Onwubolu, thanked the youths for their continuous support and appreciation for the pioneer National President of the movement, Rt. Hon. Friday Osanebi, adding that the Lawmaker represents the symbol of hope to the young generation.

Comrade Onwubolu who described Osanebi as a living legend, said Ndokwa National Youth Movement had declared every October 7th the Ndokwa Youth Day, to celebrate and recognize the impact of Osanebi to youth development in Ndokwa land.

The National Secretary of the movement, Comrade Presley Idi tasked the youths to remain steadfast and resolute in their support for Osanebi, as he remains the a leader to trust.

Comrade Idi lauded the Lawmaker for his commitment to youths development in Ndokwa Nation, adding that it takes a man with a heart of gold and devoid of sentiments to do all he does.

Rt Hon Osanebi said the skills acquisition program for the 1500 youths will be in different batches aimed at preparing beneficiaries to become self reliant and employer of Labour.

Women group led by Tina Okolo and various opinion leaders and stakeholders led by Engr. Alex Anichie were present during the solidarity rally to support the youths, appealed for greater unity and development in Ndokwa Nation.

The commended the efforts of Osanebi towards raising standard of lives in Ndokwa Nation and Delta State at large.