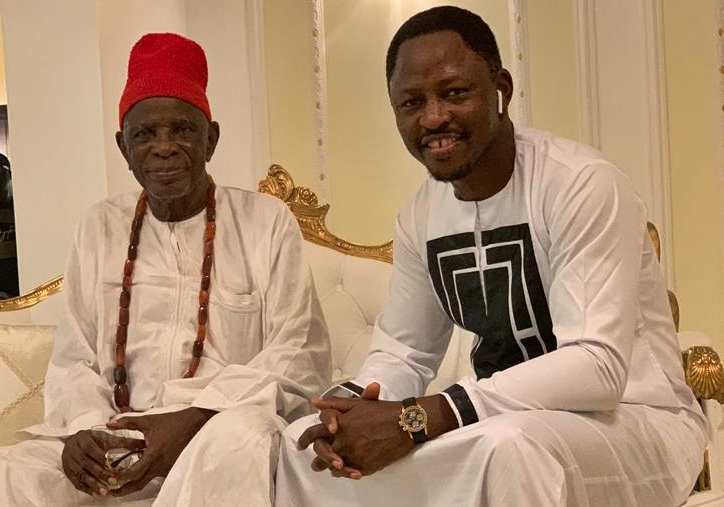 The Deputy Speaker who stated this when he played host to the Igwe of Okpai kingdom, HRM Goldring Ugbome ll at his country home in Beneku, Ndokwa East, said sustained peace in the communities would guarantee more progress and prosperity in the area.

Rt. Hon. Osanebi stated that as a member of the State Legislature, he would continue to collaborate with critical stakeholders across board to ensuring positive narratives in Ndokwa land.

He said the reelection of Dr Ifeanyi Okowa as Governor of Delta State and himself as the representative of Ndokwa East Constituency have ushered in another phase of development in the locality, stressing that Ndokwa East will continue to be great.

He expressed joy over what he described as privileged visit by the Okpai monarch and commended the royal father for his leadership qualities and love.

“I congratulate you His Majesty on the occasion of your 55th coronation anniversary and your birthday celebration. I thank you for your leadership and fatherly dispositions to me as a son, and to the Okpai and Ndokwa People in general. I applaud your virtues of wisdom, forthrightness and ideas of discipline and diligence”, Osanebi stated.

The Deputy Speaker called on sons and daughters of Ndokwa nation to be part of the 55 years coronation anniversary celebration of the Okpai monarch scheduled for Saturday 27 April 2019.

“I enjoin join the entire Okpai kingdom of Ndokwa East and indeed the Ndokwa Nation to join hands with me on the 27th of April, 2019; in thanking and celebrating God’s love and faithfulness to the royal farther and the oil-rich Okpai kingdom, as the king celebrates 55 years on the throne”, Osanebi stressed.

The traditional ruler, Igwe Goldring Ugbome ll, the Igwe of Okpai kingdom had commended Osanebi for providing quality representation to the people of Ndokwa East and urged him never to stop doing good for the happiness of mankind and to the glory of God.