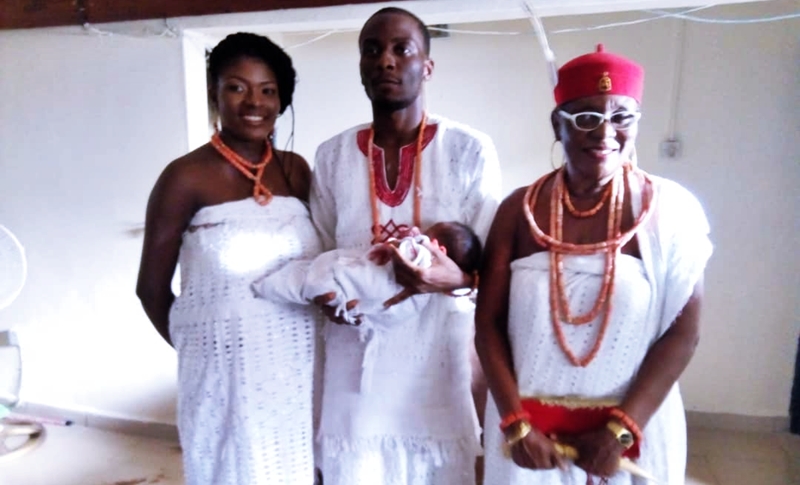 Engulfed with joy, Omu Anioma, HRM Obi Martha Dunkwu could not hold back emotions while celebrating the birth and naming of her long awaited grandson, today in Benin city.

The Omu who visited Benin city in company of Omu of Obior, HRM Omu Onyebuchibe Okonkwo, including her functionaries to name the baby, was fabulously received by the boy’s parents, Mr and Mrs Afamefuna Dunkwu-Okafor, his maternal grand parents and well wishers.

Not hiding her visible excitement, Omu Anioma also showered the grandson with lots of gifts.

Meanwhile, the newest grandmother has named her grandson DIKE, meaning ‘the powerful one, brave and victorious fighter’.

She thereafter, prayed for the already favoured baby to be great in life, to conquer territories and be known for good and truth.

The naming ceremony was conducted by the boy’s uncle who is a pastor, and apart from Dike, he was also named ‘Etinosa, David, Chukwuemeka, Adimabua, Aderinola Dunkwu-Okafor’.

The naming ceremony was unprecedented, as the boy’s grandmother, Omu Martha Dunkwu adorned the whole environment with colours and glamour. Apart from her retinue of accompanists, her old friends in Benin, including the former GM of the Observer Newspapers, Mr. Nelson Alegimhene, and the boy’s father’s childhood teacher and guardian, Sir Henry Ohiokhuaoboh were present.

However, the highly elated boy’s father, a lecturer with the University of Benin, Mr. Afamefuna Nnebuisi Dunkwu-Okafor, equally could not hold back his emotions as his wife, friends and colleagues were roundabout him to celebrate with him in his moment of joy.

The naming ceremony could best be described as a royal event, spiced with Anioma and Bini cultural intricacies. The guests, including family members were adequately entertained.