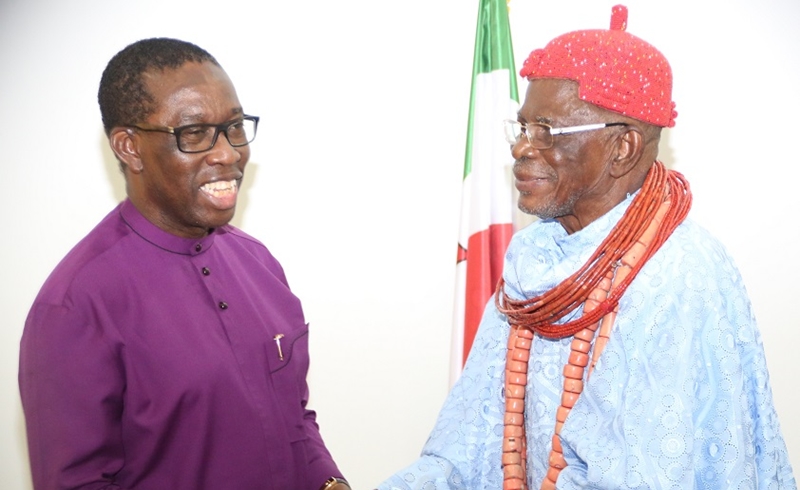 Delta State Governor, Senator Ifeanyi Okowa (left), and the Igwe of Okpai, HRM Ugbomah Enebeli Golding ll (right), during a courtesy call by the later on the Governor in Asaba.

Delta State Governor, Senator Dr Ifeanyi Okowa has assured the people of Okpai in Ndokwa East local government area of the state that his administration will construct a bridge across the Ase Creek and construct the road from Kwale to Okpai.

The governor gave the assurance Thursday, September 13, 2018 when the Igwe of Okpai, HRM Ugbomah Enebeli II led his subjects to pay a courtesy call on the governor at Government House, Asaba.

According to the governor, “we appeal to the people of Okpai to remain peaceful because, in peace, you will continue to thrive; we shall not continue to wait for the oil companies to construct the bridge across the Ase Creek; Okpai is blessed with oil and gas, and the Independent Power Plant in the community is an asset to the country.”

“I feel very sorry that for so many years, we are using pontoon to cross the Ase Creek, we will certainly take actions on that,” Governor Okowa stated.

While disclosing that his administration was making several efforts to develop all the communities in the state, especially, the oil producing communities, Governor Okowa observed that with the assets and economic activities going on in Okpai community, the area deserves a Police Station, adding that siting of a modular refinery in the area can only be decided by private investors.

The Igwe of Okpai had in an address presented by Mr. Amaechi Asugwuni lauded the development programmes of Governor Okowa’s administration.

He also, called for government presence in his kingdom noting that despite playing host to Nigeria Agip Oil Company for more than 40 years and playing host to the IPP which supplies more than 450 megawatts to the national grid and other oil companies operating in the area, it was sad that there was no motorable road to the kingdom while pontoon was used to cross goods and passengers across the Ase Creek.

They called for government to provide infrastructure, including Police Station in the kingdom, disclosing that shore protection contract awarded by the Niger Delta Development Commission (NDDC) has been abandoned.