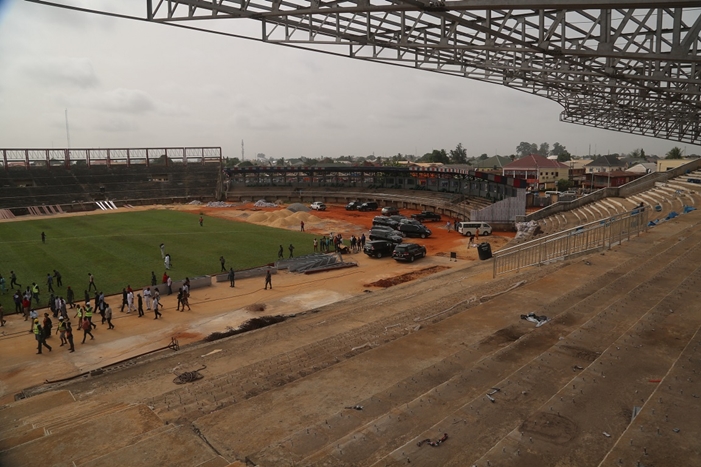 Ahead of the 2018 edition of African Athletics Championship, Delta State Governor, Senator Dr. Ifeanyi Okowa has ordered that roads around the Stephen Keshi’s Stadium be tarred.

The Governor who inspected the stadium on Tuesday, May 1, 2018 expressed confidence that no stone would be left unturned for a successful sporting event that will attract people from all over the world to Asaba.

According to the Governor, “a lot of work have been done; the main bowl is taking shape, construction work is at advanced stage at the swimming pool section, the gallery and l believe that in three weeks’ time, that is, before May 29th, the stadium will be ready for the African Athletic Championship.”

“We are aware of the numerous benefits derivable from hosting such international events, from tourism, business and opportunity for our athletes to be exposed, so, we are ready to host the world,” the Governor said, disclosing, “to ensure hitch-free movement during the competition, I have directed that the streets around the stadium be constructed, this is in addition to the construction of the driveway that we are inspecting presently.”

He continued, “you are aware that work has reached advanced stage at the runway of the Asaba International Airport which will be very busy during the tournament, we are happy and our people are ready for the event.”

Governor who was accompanied on the unscheduled visit by top government functionaries commended the quality and speed of work been done in the stadium.

The Site Engineer, Lewis Masowa who conducted the governor and his team round the facility explained that the Stephen Keshi Stadium was unique because it has 9 lane, FIFA approved football pitch with natural grass.