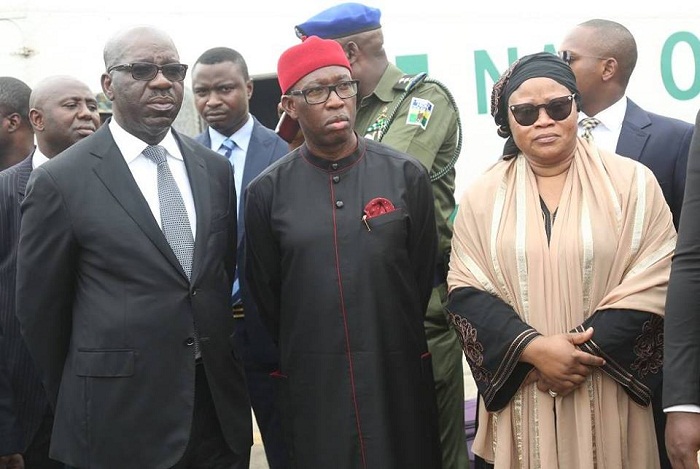 The final journey to the greater beyond of the former Governor of the Defunct Bendel State, General Samuel Ogbemudia [Rtd] commenced Tuesday 14th March, 2017, with the Governor of Delta and Edo States, Senator Dr Ifeanyi Okowa and Mr Godwin Obaseki receiving his remains at the Benin Airport.

A Nigerian Airforce Jet with the Seal of the President bearing the remains of the deceased touched down at the Benin Airport tarmac at exactly 1.20 pm. Children of the deceased, politicians, traditional dancers, among others were also at the airport.

Governor Okowa in a brief chat with Journalists after the casket bearing the body carried by Soldiers was lowered into a hearse, said the late General cannot die in the memories of Bendelites as his works are testimonies of his service to humanity.

“Today, a lot of structures stand in his name; he still lives through his works,” Governor Okowa said, recalling that his last meeting with the late Peoples Democratic Party (PDP) chieftain was during his 83rd birthday in 2015.

At that occasion, Governor Okowa delivered a lecture titled, ” Towards Sustainable Democracy in Nigeria: The role of political parties,.” General Ogbemudia passed on at the age of 84.
Governor Okowa who said, “we have lost an elder statesman for Delta and Edo States,” was accompanied to Benin by the Speaker of the Delta State House of Assembly, Rt. Hon. Monday Igbuya, Deputy Speaker, Rt. Hon. Friday Osanebi, Majority Leader, Hon Tim Owhefere and members of the Delta State Executive Council.