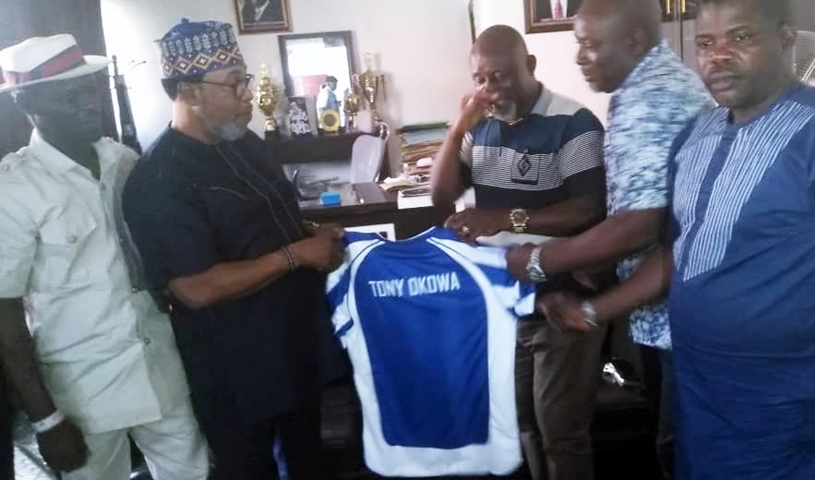 The Delta State Sports Commission has given its backing to the foremost grassroots football competition in the riverine region, the Ijaw /Iteskiri peace and unity cup.

The sports commission officially endorsed the 2019 edition of the Football Competition, also known as at a ceremony held in Asaba as its second edition kicks off in November.

The body’s intent was made known when the chairman of the local organizing committee Honourable Kenneth Nwamuocha led other members of the L.O.C on a courtesy visit to the chairman Delta State Sports Commission, Chief Tonobok Okowa.

“We acknowledge the huge awareness and keen interest that the Ijaw /Iteskiri peace and unity cup, Football Competition has generated in the state and country at large”

“I want to commend the brain behind the tournament, Comrade Sheriff Mulade for his commitment towards grassroot developmental football and sustaining it over the years.”

The seasoned sports administrator further emphasized the desire of the present administration led by Governor Ifeanyi Okowa in using sports as a tool to unite, empower and expose youths in the state to become self reliance and independent.

“The Delta State government is interested in any project that seeks to develop the game in the state, and we thank you for this stride, while counting on your continuous good working relationship with us, the state sports commission will always keep our doors open to support you, so please feel free to always count on us for any form of assistance in ensuring you have a hitch free tournament.”

He stated that the tournament as usual will draw participants from the two ethnic tribes living along the coastal region of the state, the Ijaws and the Itsekiris with the aim of engaging the youths so as to pull their minds away from negative vices that will disrupt the peaceful coexistence already being enjoyed in the area.

“The official endorsement by the Delta State Sports Commission, for this year’s edition is testament that Nigerians should expect nothing but the best in terms of grass root football. We can only but pledge to abide by the rules of the games, in terms of officiating and players’ conduct.”

He further charged intending teams to go to the various locations where they can get the forms and register to enable them participate in the tournament.

On his part, Comrade Sheriff Mulade, thanked the chairman Delta State Sports Commission, Chief Tonobok Okowa for his support for the competition.

“Getting the nod and support for any football competition by the sports commission is not a ride in the park. Indeed, the sports commission subjects initiatives of this kind to close scrutiny to ensure that the concept of grassroot developmental football, which the body is passionate about, is truly met. This is the second edition, and one can only predict that it will wax stronger, as I urge participating teams to always remember the idea behind the competition, which is living in peace with one another in other to attract meaningful development to the area.”

Registration and sales of forms for the competition is currently on as Intending teams can visit any of the locations to pick up their forms.

The tournament will kick off on the 16th of November 2019, as two centers Ugborodo and Benikrukru will host the Sixteen teams.