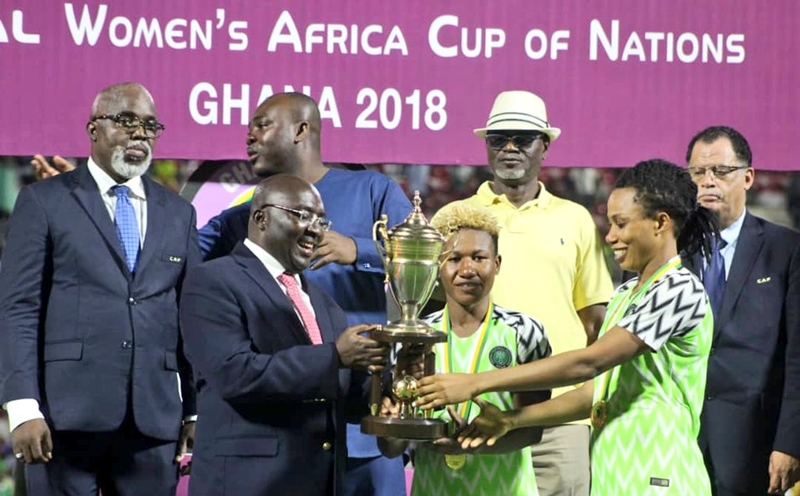 Governor Ifeanyi Okowa on Sunday congratulated the Super Falcons of Nigeria on their victory over the Banyana Banyana of South Africa in the final match of the 11th Africa Women Cup of Nations (AWCON), Ghana 2018.

In a statement by his Chief Press Secretary, Mr. Charles Aniagwu, on Monday in Asaba, the Governor expressed happiness at the discipline and commitment exhibited by the Super Falcons despite the pressure and stiff competition from their South African counterparts.

“I commend the Falcons for their resilience and determination. They have made us proud and it is my hope that they will consolidate on this victory to represent Nigeria effectively at the FIFA Women World Cup tournament in France next year”.

“This victory no doubt has restored our national pride and confidence as the most successful team in the tournament having won the Africa Women’s Cup of Nations title for a record ninth time out of 11 times”.

While commending the team for making Nigeria proud by their clear dominance on the African continent, Governor Okowa urged the team to approach the FIFA Women World Cup tournament in France with zeal and determination to change the narrative and excel on the global stage.

Governor Okowa also showered encomiums on the coaching crew, the Nigerian Football Federation (NFF), Supporters Club and all football-loving Nigerians for the support and motivation to the players, adding that Delta State Government will continue to partner with the NFF and other stakeholders in rallying round the country’s football representatives at all times.

In a related development, Governor Ifeanyi Okowa has also congratulated President of the Nigeria Football Federation, Mr Amaju Pinnick as he turned 45 years on Saturday December 1, 2018.

The Governor described the NFF boss as an illustrious son and a good ambassador of Delta State, whose dedication and contributions to the round leather game in Nigeria, Africa and the world remains indelible. He noted that Pinnick’s firm belief in revolutionising football administration in Nigeria has paid off in his achievements since he was first elected as NFF President in 2014.

“I am particularly happy that the Super Falcons gave you a befitting birthday gift by winning the ninth AWCON title as a confirmation of the giant strides and contributions you have made in revolutionising football administration globally, adding, “As a sport–passionate state, we are grateful for your contributions in making Asaba a sports tourism destination,” he said.

Fregene Calls For Commitment Of Deltans To The Re-election Of Governor Okowa
Change of Guard: Delta State Police Command Gets New Commissioner of Police
Advertisement