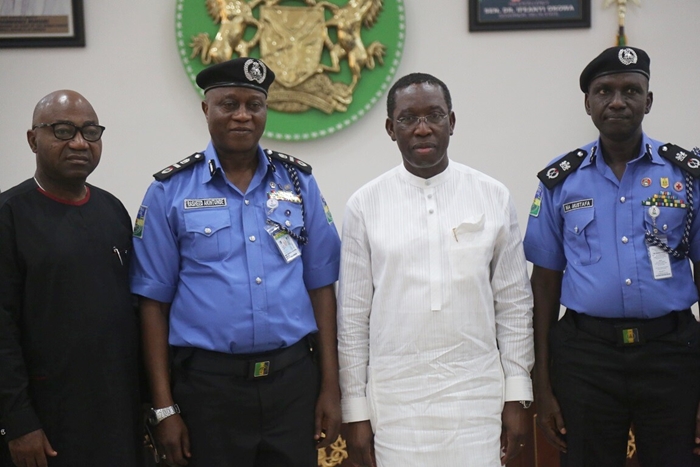 Delta State Governor, Senator Dr Ifeanyi Okowa has called on security agencies to curb activities of herdsmen in parts of the state before it snowballs into crisis.

The Governor made the call Friday, March 16, 2018 when the Assistant Inspector General (AIG) in charge of Zone 5, Mr Rasheed Akintunde paid him a courtesy visit at Asaba.

“There is a particular community in Delta State, at a point in time, we discussed it at security council meeting and just yesterday (Thursday, 15/03/18) while I was in Ughelli North for my regular Town Hall meeting, the people raised a very serious issue about the Uwheru community, it is a very pathetic situation, because the President-General of the community spoke on the fact that out of their seven communities, three of them are actually occupied by the herdsmen and the farmers are told that they must pay the herdsmen before they can enter their farms and that is very disturbing because it is strange for indigenes to pay money before they can enter their farms and I believe something has to be done before it evolves into a crisis situation,” the Governor said.

He continued, “this has been going on for several years but it has gotten worse of recent, so, AIG, this situation has to be addressed immediately as security issue.”

The Governor told his guest that his administration is concerned about the security of life and property of every Deltan and their communities, stressing the Police and other security agencies must strive to protect the different communities in the state.

Governor Okowa lauded the synergy between security agencies in the state which has ensured a peaceful state that has become home for investors.

“As a people, we know that the more peaceful we are, the more investors will come into the state and in the course of this year, we will witness a lot of ground breaking ceremony as investors are coming to the state in their large numbers,” the Governor disclosed, asserting, “we are doing a lot to provide infrastructure, we are doing a lot to engage our youths, the more youths we engage, the less idle minds we will have in the state.”

Governor Okowa  assured the AIG that his administration will continue to support security agencies in state, saying, “Delta State is largely peaceful, we take matters of security serious, there is a lot of collaborations between different security agencies in Delta State and beyond the collaborations,  we take the issue of information gathering serious as we nip security challenges in the bud, we also, have state advisory and peace building council which is made up of experienced men and women of impeccable character, they also, help to maintain peace in the state.”

The AIG had told the Governor that he was on a familiarisation tour of Police formations in the state,  observing, “your administration has rendered uncountable support to the Police Command in different areas, your support has greatly, enhanced the performance of the Command and we want to thank you and assure you that the Police will ensure an all time peace in the state.”