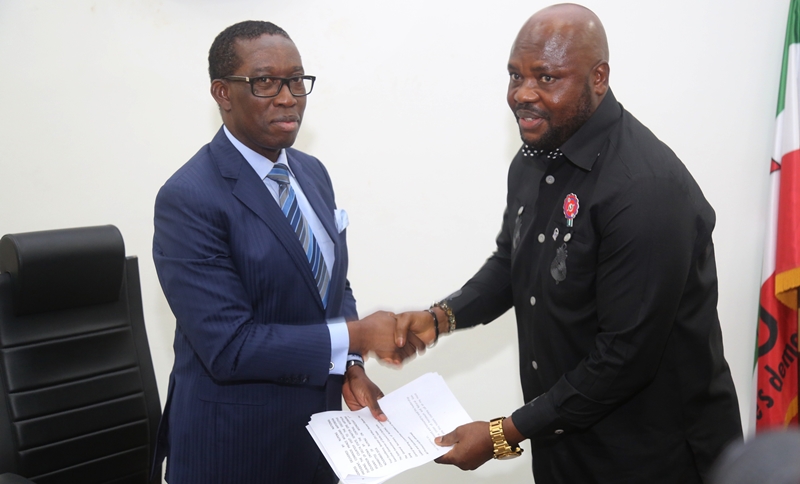 Delta State Governor, Senator Dr Ifeanyi Okowa has challenged trade unions to engage in actions that will contribute to the development of the country.

Governor Okowa made the call Wednesday, November 7, 2018 in Asaba when the National President of National Union of Petroleum and Natural Gas Workers (NUPENG), Comrade Prince William Akporeha led the executive of the union to pay  him a courtesy visit.

According to Governor Okowa, it is important for all hands to be on deck to develop the country, disclosing that, “if all the states are developed, the country will be developed.”

“As a state, we are labour friendly, we work in partnership with labour and this partnership has been beneficial to labour, government and people of the state, especially in terms of peace and development,” the governor stated.

While commending NUPENG for its interest to construct a 1,000 capacity trailer park and petrol stations, stated, “I am glad with this partnership you are extending to us to build a tanker park and filling stations, because, it will create jobs for our youths, reduce the level of accident and traffic nightmare in the Warri area, beautify our cities and increase our revenue base.”

“It would also be good for our motorists that NUPENG will have petrol stations as petroleum products will be available always,” he stated while congratulating the Union on its 40th year anniversary.

Governor Okowa, also, accepted to receive an award of excellence from the Union and appealed  to oil companies to encourage Unionism for mutual benefits.

Earlier, Comrade Akporeha had told the governor that he will be presented an award of excellence during the 40th anniversary celebration of the union , saying, “the leadership of our great union on our 40th anniversary celebration, finds you worthy and deserving of special award of excellent services to Delta State, the workers in particular and providing conducive and enabling environment for the growth and development of Nigeria Oil and Gas Industry.”

He informed the governor of plans by the Union to build a 1,000 capacity ultra-modern tankers park and mega filling stations in the state.