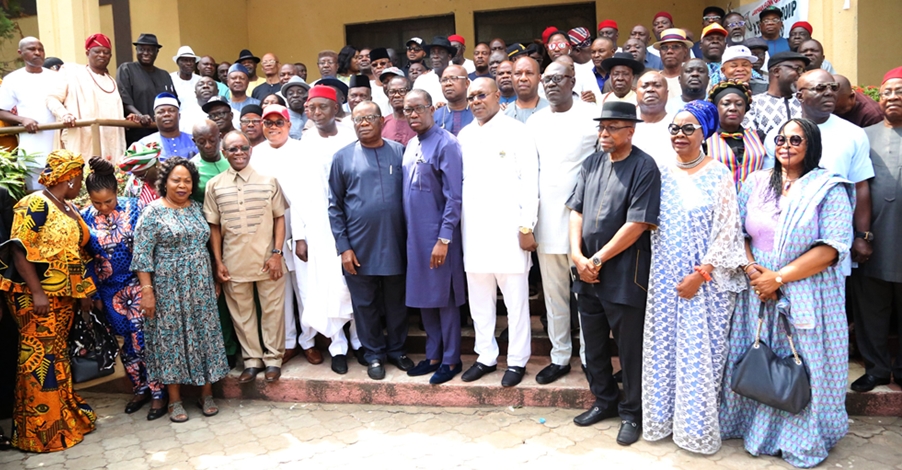 Delta State Governor, Senator Dr Ifeanyi Okowa has urged members of the Peoples Democratic Party (PDP) campaign council to engage in issue based campaigns, expressing confidence that the PDP has successfully executed projects that will earn it victory in the 2019 general elections.

Governor Okowa made the call Monday, December 10, 2018 at the inauguration of the PDP campaign council by the Chairman of the party in the state, Barr. Kingsley Esiso. The ceremony took place at Asaba, and was attended by Chairman of the Council, Prof. Sam Oyovbaire and its members.

“First, I want to thank the party for putting up this campaign council and other bodies that have been set up for the purpose of the campaign for the PDP in Delta State,” he said.

“As we go into the campaign, it should be issue based, we are confident that there is a lot of achievements for us to campaign with which will earn us victory. Other persons may go out there to insult people and say what they do not know, don’t respond to such persons, tell the story of where we have been, where we are today and what we will do because, we have a lot of projects that if you are looking at projects to commission, we have a lot; we have commissioned several projects and there is a lot more to be commissioned.” Okowa stressed.

Governor Okowa who disclosed that the campaign should be concentrated at the unit levels, emphasised, “tell the truth to the people, if there are things you don’t understand, get information from the nearest person or put a call through because, we are not going to deceive our people, we must always tell the truth.”

“I believe that Delta State is a PDP state, I believe that we have enough projects to campaign with, so, those who are planning to rig the election should know that our votes must count,” he said while listing some of the achievements of his administration in the health sector, road construction, job creation, among others.

He congratulated members of the campaign council and admonished them to remain united, saying, “if you go into the campaign with one mind, there is nothing that can stop us, there is a need for total reconciliation in our wards and local government areas; the candidates must be humble, in whatever they do, they must be seen as driving the process of the campaign, there must be sincerity of purpose, we must be inclusive in all that we are doing.”

Chairman of the PDP in the state, Barr, Esiso had while inaugurating the campaign council, said, “we want grassroots based campaign, campaign at the unit levels; we must tell our people what Governor Okowa has done in the last three years and that Deltans believe in zoning; Delta State has turn by turn zoning, the people have accepted the principles of zoning. “

Chairman of the campaign council, Prof. Oyovbaire on behalf of members of the Council thanked the leadership of the PDP for choosing them to drive the campaign process.

He observed that the performance of Governor Okowa in the past three years will make the campaign easy as Deltans are aware that they will gain more in the next four years.