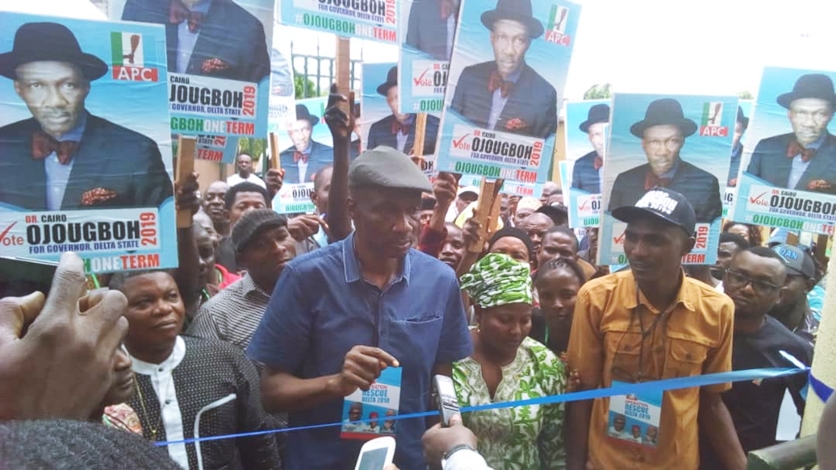 The leading contender for the number one seat in Delta State from the camp of the All Progressives Congress (APC), Dr. Cairo Ojougboh has once more ignited calls for the impeachment of the State Governor, Dr. Ifeanyi Okowa from office following what he describes as fraudulent policies in the Okowa led administration.

Dr. Ojougboh, who is very hopeful to clinch the APC ticket in the State for the 2019 general election, stirred the crusade for Okowa’s sack on Friday, August 31, 2018 after inaugurating his gubernatorial campaign office along DBS road Asaba which he said will also serve as the Buhari/Ojougboh Support Group headquarters in Delta State.

While moving in droves amidst cheers from his thunderous supporters, Dr. Cairo Ojougboh marched through the major streets in the State capital and made his way to the State office of the Independent National Electoral Commission (INEC) to register his presence and submit his impeachment petition to the electoral umpire.

At the INEC office, the governorship aspirant and his cheering supporters were received by the Administrative Secretary of the Commission in the State, Mrs. Rose Anthony.

Ojougboh informed the Secretary of their mission saying, “All we are saying is that, Okowa should be impeached because of the fraudulent policies of his nepotistic administration. So we implore the INEC and the State House of Assembly to investigate and commence impeachment process with immediate effect”.

“This movement is Buhari/Ojougboh Support Group and we are also saying that we want free and fair elections come 2019. One Man, One Vote and we are prepared to work assiduously in order to give Buhari One million votes. We are equally confident of the credibility of INEC that is why we took pains to come here after going to the House of Assembly with this petition for Governor Okowa to be impeached”.

In her response, Mrs Anthony promised the gubernatorial aspirant and his supporters, that the commission will look into the petition and act accordingly.

She harped that INEC was open for all who have petitions or allegations against any political office holder and further stressed that the commission would conduct a free and fair elections come 2019 reassuring that, every vote would count and the peoples choice would be manifested.

The INEC Administrative Secretary further charged the Buhari/Ojougboh Support Group to refrain from every act of violence in the forthcoming elections.

Earlier, the impeachment petition was equally submitted to the State House of Assembly on their voyage to the INEC office.