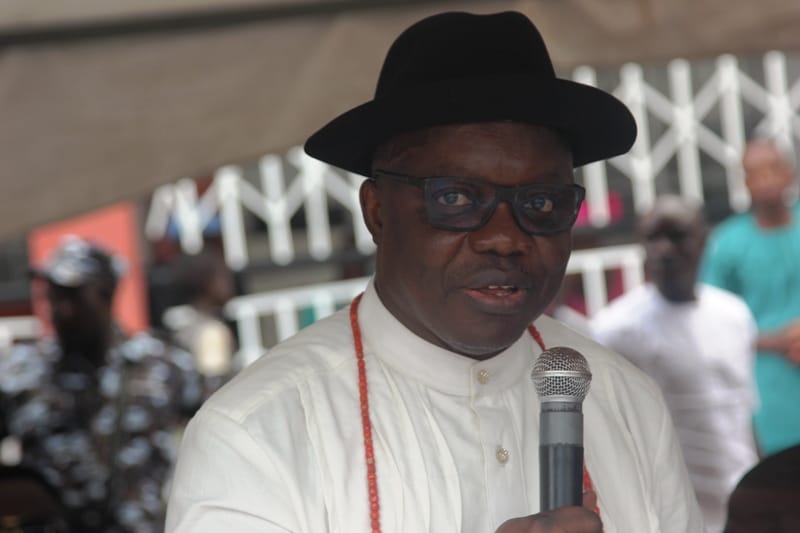 Dr. Emmanuel Eweta Uduaghan, the immediate past governor of Delta State and 2019 Delta South APC senatorial hopeful has once again warned that Delta State must not be in the opposition camp after the 2019 general elections.

Dr. Uduaghan gave the warning at Olomoro, Isoko South, where he paid a condolence visit to Chief Lucy Esigie, a chieftain of the APC in company of the APC state Chairman, Prophet Jones Erue, House of Representative hopeful, Mr. Joel Onowhakpo Thomas and other chieftains of the party. The deceased, Mrs Alice Ogri was a sister to Chief Lucy Esigie, the leader of APC in Isoko South.

Scores of supporters of the new APC leader gate-crashed the venue on hearing that the former governor was on their soil, being his first public appearance since his defection to APC.

The Delta South Senatorial hopeful, humbled by the eagerness of the growing crowd to hear from him, decided to address the crowd.

Dr. Uduaghan told the crowd that people from the opposition have not gotten over the shock that hit them since his defection last week.

“They have been trying to deconstruct the meaning of John the Baptist that I used in my defection statement.

“They are breaking their heads over it and wondering who and who will Uduaghan take to the APC.

“Well, my new role as John the Baptist would be to mobilise virtually every PDP member, not just in Delta State but also in the Niger Delta to the progressives’ fold.

“There are some people that we will not allow to cross over. They know themselves,” Uduaghan averred.

Dr. Uduaghan queried if the dividends of governance are reflective of the wealth Delta State produces since playing opposition three years after he left government and the people chorused a thunderous ‘No!’.

Continuing, the former governor said: “Moses grew up in the palace where everything was comfortable for him but the Lord told him that his people were suffering.

“He charged Moses to leave the palace so as to liberate them.

“I have answered the call to return to active politics to liberate and unite our people who have been deeply polarised by the leadership of the PDP.

“I have come for APC to take over and I am leading the Take Over Squad,” he opined, adding that he has pitched his tent with APC to liberate the state from the jaws of the PDP.

He charged the Delta State APC leadership present at the occasion, the people of Isoko and the entire state to get ready because the battle would not be an easy one, but victory was sure for the party if everyone played their parts well.

He specifically warned the youths present to stop fighting for crumbs that the PDP would throw at them, assuring that if they were hard working and purposeful, he would lead them to where they would be empowered for life.