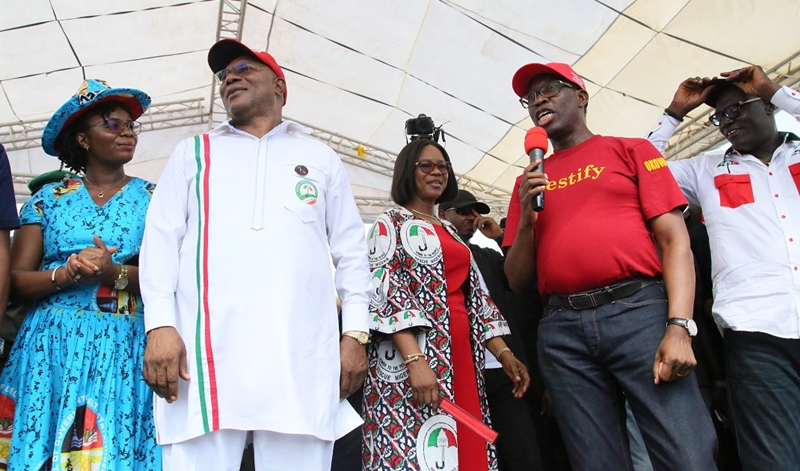 Delta State Governor, Senator Dr Ifeanyi Okowa has said his administration does not discriminate in dishing out democratic dividends to Deltans because he sees the people as belonging to one united family.

According to the governor, “we run an all inclusive government, we don’t discriminate, we don’t execute projects based on the level of support we receive from people because, Deltans are one united people, we believe that if you don’t support us today, you will support us tomorrow.”

“We are impressed with the crowd we are seeing here, it is a clear evidence that the people appreciate the road we are constructing in the area, the schools we have constructed, our empowerment programmes; we are committed to doing more,” the governor said, adding, “I want to seize this opportunity to thank Deltans, especially, the people of Udu for agreeing that we should work together.”

He thanked the people for agreeing to live in peace with their neighbours, the people of Ogbe-Ijaw, noting that with peace, the area will witness unprecedented development in the next four years.

Governor Okowa who attended the rallies with his wife, Dame Edith and his Deputy, Barr. Kingsley Otuaro, appealed to the people to vote for all the candidates of the PDP.

At Ogbe-Ijaw, he thanked the people of Warri South-West local government for their support over the years, expressing confidence that with the number of registered voters in the area, they will beat their previous records in terms of number of votes cast for candidates of the PDP.

“People are testifying about PDP because of our good work; I can testify that Warri South West is doing very well politically, your leaders are united; remain resolute in delivering high number of votes to the PDP by voting for all the candidates of the PDP,” he said.

Governor Okowa continued, “there should be no anti-party activity, all the votes should go to the PDP.”

While listing the projects his administration has executed in the area, he also, thanked the people of Ogbe-Ijaw and Aladja for agreeing to live in peace, saying that with peace, the area will witness tremendous development.

Chief Onosorueh stated, “this is the first time Udu is witnessing monumental government presence; Udu will reward you (Governor Okowa) by voting for the PDP 5/5, all the candidates of the PDP in the elections.”

To Chief Omare, PDP should expect more votes in the 2019 general elections than what they got in previous years because, Governor Okowa has wooed more Deltans to the PDP through project delivery.

Hon. Solomon Funkekeme, Prof. Oyovbaire, and Barr. Esiso in their sepoerate speeches, stated that apart from electing Governor Okowa on the basis of rotation, the governor had delivered projects that have impacted greatly on the lives of Deltans.