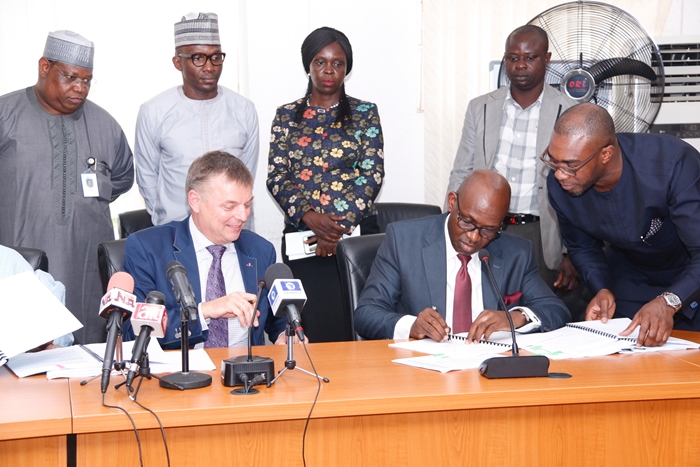 The construction of Bonny Island–Bodo road in Rivers State came closer to actualisation today as Nigeria LNG Limited (NLNG) signed a tripartite agreement in Abuja with the Federal Government, represented by the Ministry of Power, Works and Housing, and Julius Berger Nigeria Limited to part-fund the construction of the N120.6 billion road connecting communities in the state.

The event was taken contemporaneously with the signing, between the Federal Government and Julius Berger, of the contract document for the construction of the road.

NLNG’s involvement in the project is significant as the largest single CSR initiative ever undertaken by a private company in Nigeria.

At a ceremony to formalise the partnership, NLNG agreed to provide 50% counterpart funding, amounting to N60.3 billion, to boost safe travels and socio-economic activities in the region through the road. The 34 kilometre road will help address the twin challenges of poverty and unemployment as well as improve  the lives of people of the region, especially those from Bonny,  Ogoni, Okrika, Eleme, Andoni, and other communities in the Niger Delta.

The Federal Government efforts to build the road had been hampered for decades, largely by funding and contractor issues, causing NLNG to intervene especially because of the criticality of the road to residents of Bonny Island, who daily brave the vagaries of the sea to travel to the mainland.

The agreement was signed by NLNG’s Managing Director and Chief Executive Officer, Tony Attah, and the Power, Works and Housing Minister, Babatunde Fashola on behalf of the Federal Government, with Julius Berger signing through Mr. Wolfgang Goesh, its Managing Director.

In his remarks, Attah said “This for Nigeria LNG is part of our effort to contribute to the advancement of the Niger Delta. More importantly for us as a company, our contribution to the project will lead to the accomplishment of the dream of connecting Bonny Island to the rest of Rivers State by road and not only by sea.

“Our greater joy is that the road will ease the plight of people of Bonny Island, the community that has amicably hosted the NLNG Plant and operations for so long. Over the years, our love for our host community had compelled us to open up our strictly  business sea vessels to accommodate members of the community, and their visitors, and save them from the hazards of the sea to the best of our ability.

“If you have kept track of our business principles and all our CSR activities, you will by now be convinced that we have kept our promise to help build a better Nigeria and especially our host communities in the Niger Delta region,” he said.

Commenting on the partnership with NLNG, Power, Works and Housing Minister, Fashola, commended NLNG saying, “NLNG has stepped up as a unique example of the constructive role the private sector can play in national development. This project represents a defining moment in Government’s determination to strengthen and improve the quality of life in the Niger Delta which holds so much of the country’s resources.”

Honourable Minister for Power, Works and Housing, Babatunde Fashola at the Agreement Ceremony of NLNG, FG and JBN

NLNG’s financial contributions to Nigeria and the Niger Delta have been significant. It has generated $90 billion in revenues, paid $5.7 billion in taxes as well as committed more than $200 million to corporate social responsibility projects in the Niger Delta especially in the areas of capacity building and infrastructure development. The company also pays or remits N6 billion annually to the Rivers State Government and over N140 million annually to the Bonny Local Government Council under various heads of taxes/levies.

NLNG continues to contribute significantly to the Niger Delta through its unique approach to corporate social responsibility in areas of human capital, Infrastructure development and enterprises. The company also recently spent $12 million on building/refurbishing and equipping engineering laboratories at six universities selected from Nigeria’s geo political zones. All the projects have been successfully completed and commissioned.

Hundreds of young Nigerians, especially from the Niger Delta benefit from NLNG post-primary, undergraduate and overseas post graduate scholarships. Also significantly residents on Bonny Island have access to uninterrupted electricity supply, pipe borne water and accessible roads courtesy of NLNG and its partners on the Island.

Through a Memorandum of Understanding signed with Bonny Kingdom for the economic development of the Kingdom, NLNG is committing N3 Billion per annum over a 25 year period  to be managed by and on behalf of the community.