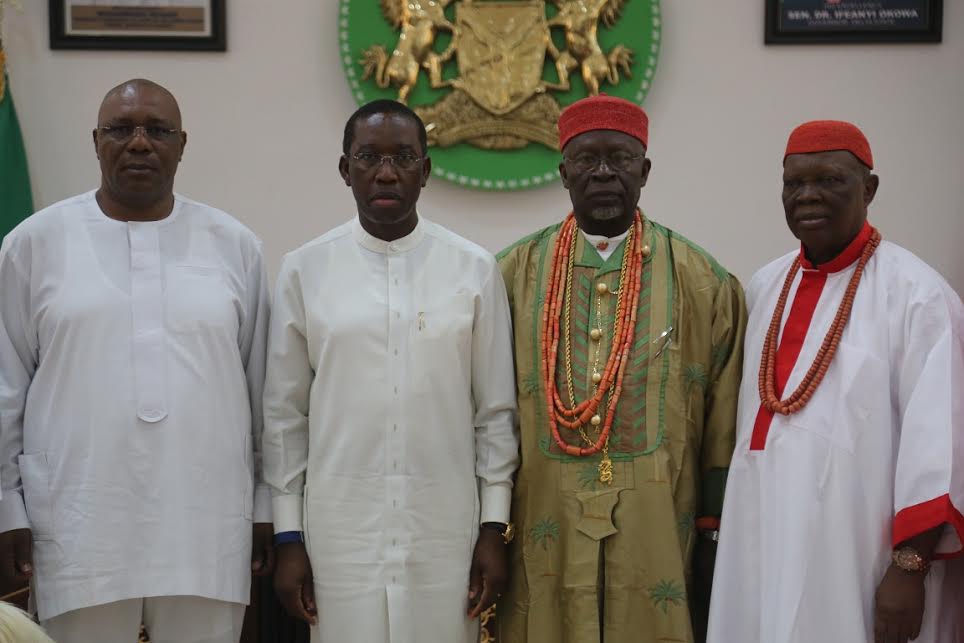 Delta State Governor, Dr. Ifeanyi Okowa has said Nigeria will be a more united and stronger nation if the zones gets what they deserve.

According to the Governor, “there is no doubt that generally, we need a united Nigeria and to achieve that is to give each zone what is due her and also by respecting who we are as a people and allowing the zones to develop at their own pace.”

The Governor spoke on Thursday, June 15, 2017 when traditional rulers in the South-South geo-political zone under the aegis of the South-South Monarch Forum led by HRH Edmund Daukoru, the Amanayabo of Nembe Kingdom paid him a courtesy visit in Asaba.

“There have been various threats coming across the nation which include the issue of kidnapping, armed herdsmen who are ravaging various communities and I think that our traditional rulers are well positioned to be able to sit down and offer suggestions to us and also to be able to plan with us on the national discourse as it involves the armed herdsmen who are destroying our economy and also destroying the means of livelihood of our people,” Governor Okowa said, adding, “there is no doubt that the South-South by God’s grace is well endowed and we have played a major role in the economy of this nation and I think that there is a need for us  stakeholders to sit together and see how we can utilize the resource to develop our zone beyond where we are and to ensure that we are able to get a reasonable share of what we contribute to the national purse because the oil economy will not last forever; it means that we have to be able to create a South-South geo-political zone that will stand the test of time in the future, if possibly when the oil economy is gone, that is why we need to diversify and develop our states.”

He continued, “as the people of South-South, we need an organized forum like this, we need traditional rulers that will be a strong force in national issues, I believe that even now our voices must be strengthened and I am very happy that the security agencies that were involved in the course of duty to maintain peace in Niger Delta, we thank all our traditional rulers for the parts that they played in ensuring that we have peace at the moment and should be able to consistently pull the support of our communities to consolidate on the peace because any attempt to destabilize us again is something that is not going to be the best for us as a people because whatever happens especially as it concerns our God-given wealth which is crude oil and gas is something that we are able to settle through dialogue.”

Governor Okowa at the occasion, commended the traditional rulers for the roles they are playing in achieving peace in the communities, reiterating, “I believe that the Governors of the South-South zone welcome this partnership and by God’s grace, we will try to achieve that as we meet, we need to discuss the roles that the traditional rulers will play in helping us to govern and give strength to our zone.”

Earlier, King Daukoro who was accompanied on the courtesy call  by members of the Forum disclosed that more than 200 first class traditional rulers from the South South zone are members of the forum which was designed for the Monarchs to speak with one voice on issues affecting the zone.

He commended Governor Okowa for his developmental strides in the state, assuring, “we are here to tell you that we are ready to partner with you as traditional rulers in the development of the zone.”