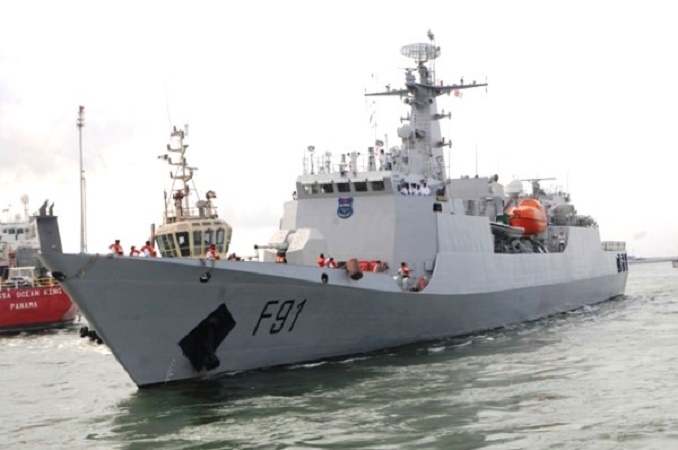 Nigeria’s newest Military vessel, the NNS Unity Warship, is currently sailing towards The Gambia ahead of possible military intervention over President Yahya Jammeh’s refusal to accept election defeat and step down when his term expires on Thursday.

A Nigerian military source told the BBC the patrol vessel was currently sailing off the coast of Ghana after leaving from the commercial capital, Lagos.

Although Nigerian Military authorities had earlier debunked claims of attacking any country, the initial aim of this deployment is asserted to put on a show of force rather than to launch an attack.

Senegal is preparing ground troops ahead of Thursday’s deadline.

The Gambia’s tiny army is no match for the regional powers. In recent years, President Jammeh has been promoting his loyalists, including Army Chief Ousman Badjie, to ranks beyond their competence.

ALSO READ:  I Will Not Step Down Says President Jammeh of Gambia

This has further downgraded its military capabilities.

The regional body, Ecowas, has said that military intervention will be a last resort to bring an end to the political deadlock in The Gambia.

The president made the announcement on national television, where he said any acts of disobedience to the laws of Gambia, incitement of violence and acts intended to disturb public order and peace, have been banned under the state of emergency.

He had initially declared his willingness to hand over power if he lost, but later changed his mind after Mr Barrow was declared winner.

The state of emergency banned “acts of disobedience” and “acts intended to disturb public order”.

Jammeh took power in a coup in 1994 as only the second president since Gambia’s independence in 1965 and his government gained a reputation for torturing and killing perceived opponents, rights groups say. In 2015, he declared that the country was an Islamic Republic.

Pro-democracy activists across Africa welcomed his defeat and his refusal to step down has provoked an internal crisis as well as a test of courage for regional leaders.

Gambia’s top judge on Monday declined to rule on Jammeh’s election petition and in a political blow to the president, the ministers of finance, foreign affairs, trade and the environment have resigned, according to ministry sources.

Oil Will Not Dry up in Niger Delta, Osinbajo’s Visit Meaningless – Kenneth Gbagi
Nic-Ola Beauty Sparkles Corner: Say It When You Hear It
Advertisement