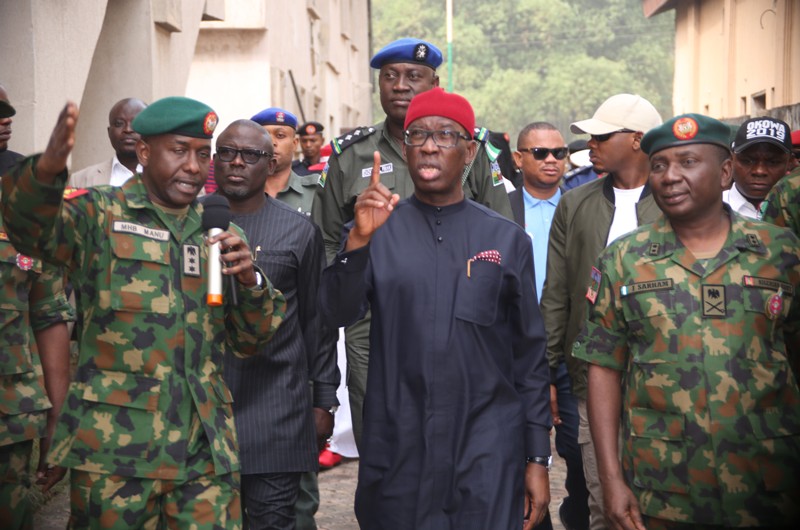 …As Governor Okowa Calls for Information Sharing Among Security Agencies.

Buratai, represented by the GOC 6 Division, Major General Jamil Sarham, stated that the exercise is to checkmate the security challenges being witnessed in the region such as militancy, kidnapping and banditry portend that dissident groups and criminal elements could cash in on the situation to perpetrate large scale of violence before, during and after the 2019 general elections.

Major General Jamil Sarham stressed that the establishment of the 63 Brigade was necessary for the continual protection of the nation’s interest stating that Operation Python Dance III will take place in the state.

He commended the Delta State Government for providing temporary takeoff for the Brigade.

On his part, the State Governor, Senator Dr Ifeanyi Okowa while commending the Nigerian Army for setting up the 63 Brigade in Asaba, stated that sharing of information among security agencies is very vital to addressing security challenges in the country. Delta State Governor, Senator Ifeanyi Okowa (left), before the inspection of a guard of honour mounted by a detachment of the Nigerian Army, during the inauguration of 63 Brigade, Nigerian Army in Asaba. PIX: BRIPIN ENARUSAI

The governor observed that the country will be more secured when proactive measures are taken with the aid of timely sharing of information by security agencies.

He said, “I congratulate the Nigerian Army for setting up the 63 Brigade; Delta State is a peaceful state, but, we welcome actions that will consolidate on the existing peace.”

“Sharing of information among security agencies will have a lot of impact on checking security challenges in the country; security agencies have done a lot for us to have peace and secure oil facilities in our state, but, I must appreciate the roles played by our traditional rulers and stakeholders who also, assisted us in achieving peace,” Governor Okowa said.

He continued, “with the coming of the 63 Brigade of the Nigerian Army, we will have more men to secure our state, we will continue to assist in whatever ways we can for you to carry out your functions.”