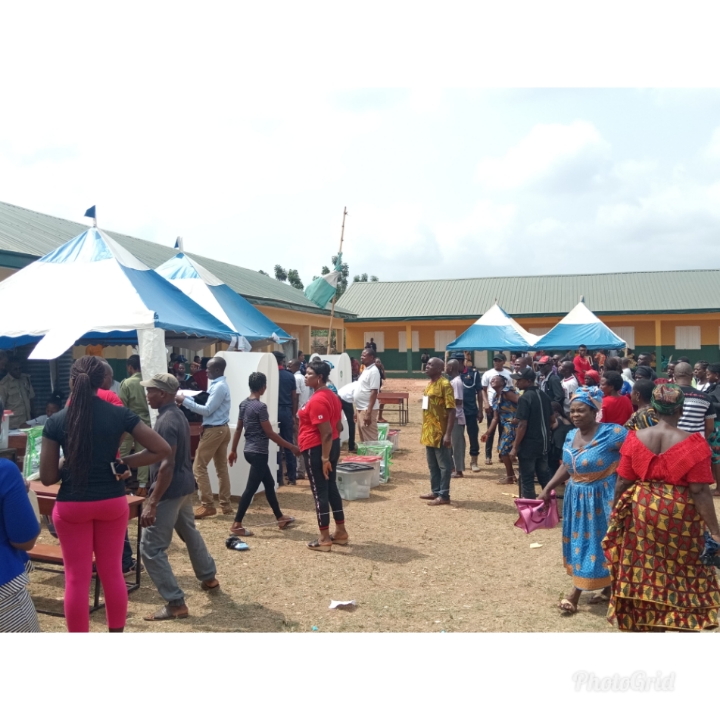 Voting Process in Akwukwu-Igbo, headquarters of Oshimili North Local Government Area has been adjudged to be peaceful with massive turnout of voters across the community.

A visit to the local council by ASABA METRO confirmed the enthusiasm of electorates happily going about their Civic Obligation.

Speaking to Journalists at Ward 1, Unit 4, in Akwukwu-Igbo, a former council Chairman and PDP Chieftain, Hon. Tony Ogbo expressed delight at the response of the voters and commended the Independent National Electoral Commission (INEC) for it’s high level of preparedness.

His words; “The turnout is impressive. As early as 8:00am, voters trooped out to the voting center.”

“I want to commend INEC for the early arrival of materials. It’s been very peaceful and the enthusiasm of people to vote is commendable.”

Hon. Ogbo however expressed worries at the rate at which card readers malfunctioned which has been widely reported as the major cause of delay across voting centers.

“Some of the card readers malfunctioned which delayed voting process for about 2 hours until the use of manual accreditation process was initiated.

He added that the improvement recorded by INEC, is being hampered by the accreditation process which he discribed as rigorous. “Even with the creation of new voting points, people are still standing for long due to accreditation lapses.”

At Illah Ward 3, Unit 8, Mr. Onwe Moses confirmed to this medium that although materials arrived late, the process is peaceful and no record of violence recorded in the community.

He added that the faulty card reader however delayed the commencement of the voting process which began at 10:54 am.

At Ugbolu Ward 9, Unit 9, voting process is ongoing with the party agents of PDP and APC expressing satisfaction with the process.

Chinedu Okwudinma, agent of the PDP noted that the process is very peaceful, calm and the turnout quite impressive.

Aligning with the submission of the PDP agent, the APC agent, Charles Egbuchi said that the existing peace in the community impacted positively to the calm and smooth voting process being witnessed.

“There is no cause of alarm. The cordial understanding is attributed to the brotherly love existing and Ugbolu is a peaceful community. Even when the card readers failed, the manual accreditation process didn’t cause troubles amongst the agents.” They noted.