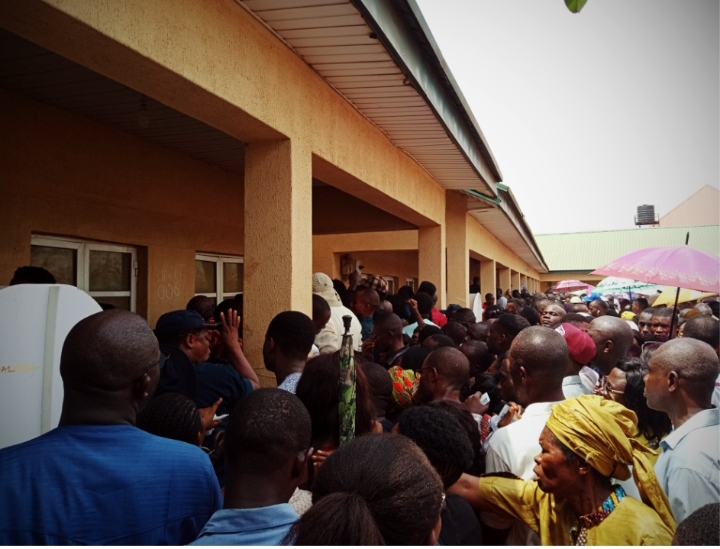 At Igbodo in Ika North East, we observed that there was high level of interest and participation by the people, despite challenges, including delay in the commencement of the exercise in the areas.

The Uzoigwe Primary School, Asaba in Oshimili South which serves as collation center for Ward nine, the Electoral materials were still being sorted out by the INEC officials as at 8:10am.

The development was same at Azagba Primary School ward four and Ogbomanta Ward 10 voting centers also in Oshimili South when our news crew got there at 8:30 am 8:45am respectively.

At Ward Nine, unit three and four, Okpanam in Oshimili North local government area, accreditation and voting commenced at exactly 9:10 when an elderly woman, Mrs Mabel Nducgukwuka was the first to cast her vote.

The Delta State Commissioner for Information, Mr Patrick Ukah who was among the early voters at the unit three, commended the turnout of voters but expressed concern over the malfunctioning of the card readers.

At ward one, Atuma also in Oshimili North, it was gathered that voting exercise begun as early as 8:15am, but voting was still on as at 10:45am when our news crew left the community.

At ward four, Ugba Primary School, Onitcha Olona in Aniocha South local government which witnessed a huge turnout of voters, the people were faced with inefficiency of the card readers.

The former Speaker of the state house of Assembly, Rt Hon Victor Ochei said he was yet to vote as at 10:55am when our news crew departed from the center.

Stakeholders, including Hon Emeke Nwaobi, Comrade Kingsley Azuh and Mr Nkem Osu, were however not happy over the slow pace of the accreditation and voting process as a result of insufficient and malfunctioning card readers at the centers.

At Ward five Abuedo primary School, Ubulu Uku in Aniocha South local government area voting center, the challenges were same despite the enthusiasm of the people to exercise their Civic Right which is voting my conscience.

A member of House of Representatives, Hon Onyemechi Mrakpor and the state commissioner for Agriculture, Chief Joe Utomi, stressed that the system of voting needs to be addressed, describing the ugly narratives as sad.

They expressed the hope that the process remains calm till the end.

At Igbodo community in Ika North East, the four voting centers witnessed large turnout of voters who were determined to perform their civic duties despite the issues with the card readers.

The people reacted angrily over the malfunctioning of the few card readers brought to the community, adding that some of the adhoc staff, appears inexperienced in handling the machine.

Accreditation and Voting however started at about 1pm in some of the centers.

At Obior in Aniocha North, voting which the people said started after about two hours delay from the scheduled time of commencement was still on when we left the community at 1:30pm.