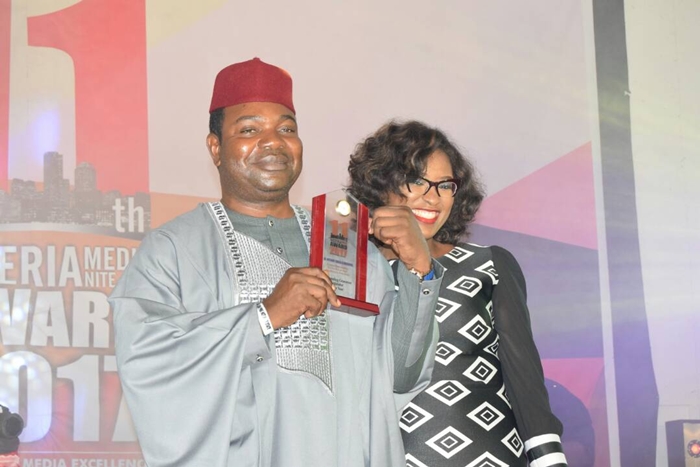 The Honourable Member representing Ika North East State Constituency in the Delta State House of Assembly (DTHA) who also doubles as the Chairman of Public Accounts Committee (PAC) of the House, Hon. Anthony Emeka Elekeokwuri, was on Sunday, September 17, 2017 honoured at the 11th Nigeria Media Nite Out Award (NMNA) as the “Outstanding Grassroots Political Representative of the Year”, at an enlarged ceremony held at Lagos Airport Hotel, Ikeja, Lagos State.

Speaking at the ceremony, the Chairman, Governing Board, Nigeria Media Nite Out Award, Engr. Kunle Adebayo, said  that the Awardees are studied by a team of professionals and designed to appreciate and recognized notable Nigerians for their distinguished careers and humanitarian achievements.

He noted that Hon. Elekeokwuri was honoured with this Excellence and Achievement Award as a result of his effective, efficient, quality and qualitative representation of Ika North East State Constituency in the Delta State House of Assembly which he described as commendable.

Elekeokwuri Honoured at the 11th Nigeria Media Nite Out Award

He stressed that the Award was in recognition of these and other numerous achievements of the Lawmaker during the period under review at the Delta State House of Assembly.

Speaking to newsmen at the event, Elekeokwuri expressed gratitude to God for the award bestowed on him and thanked the organizers of Nigeria Media Nite Out Award  for finding him worthy and honouring him with this prestigious award. He noted that the  award is a call for further and better representations of his people of Ika North East State Constituency and by extension the Delta State. He dedicated the Award to God Almighty who he described as his strength and secret, and his political mentor and leader- His Excellency Senator (Dr) Ifeanyi Arthur Okowa, the Executive Governor of Delta State and the good people of Ika North East for their continued support and prayers.

Also honoured at the event were Ooni of Ife, Oluwo of Owo Land, Emir of Borgu  kingdom, Governor of Kwara State, Sule Lamido and others.