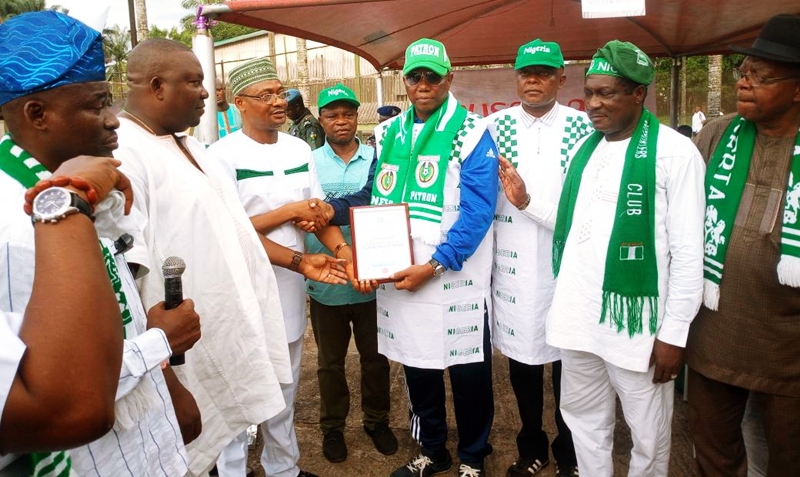 Chief Felix Anirah being Honoured as National Patron of the Nigeria Football Supporters Club, by the National Chairman

… As Ladipo Describes Anirah as a Great Man.

The President-General, Nigeria Football Supporters Club (NFSC), Dr Rafiu Ladipo has described High Chief Felix Anirah as a great man who gives everything to make people around him happy.

Dr Ladipo who was represented by the National Chairman of NFSC, Rev Samuel Ikpea, stated this on Sunday, during the investiture of Chief Anirah as the National Patron of the Club, at the Sapele Athletics Club in Sapele, Delta State.

He noted further that despite Anirah’s status in society, he is a man with no pride as he freely relates with all class of people irrespective of their status or religious inclination.

“If any man deserves to be called a great man, then Anirah is one. He is one man who has given so much joy to people around him and his contribution to humanity is unprecedented.

“He is one man who does not have pride in his dictionary that is why he goes all out to do all he can to help the downtrodden and those who need help” he said.

In his response, Chief Anirah, who is the chairman of The Felix Anirah Foundation, an obviously elated man, thanked the Nigeria Football Supporters Club for finding him worthy of the honour out of over 180 million Nigerians.

Speaking on his upcoming sponsored Football tournament in June, Anirah said “the first prize is N2m, while the second and third prize is N1m and N750, 000, with lots of other gifts items.”

He added that any nation that wants peace must take care of its youths by channeling their youthful energy to productive venture.