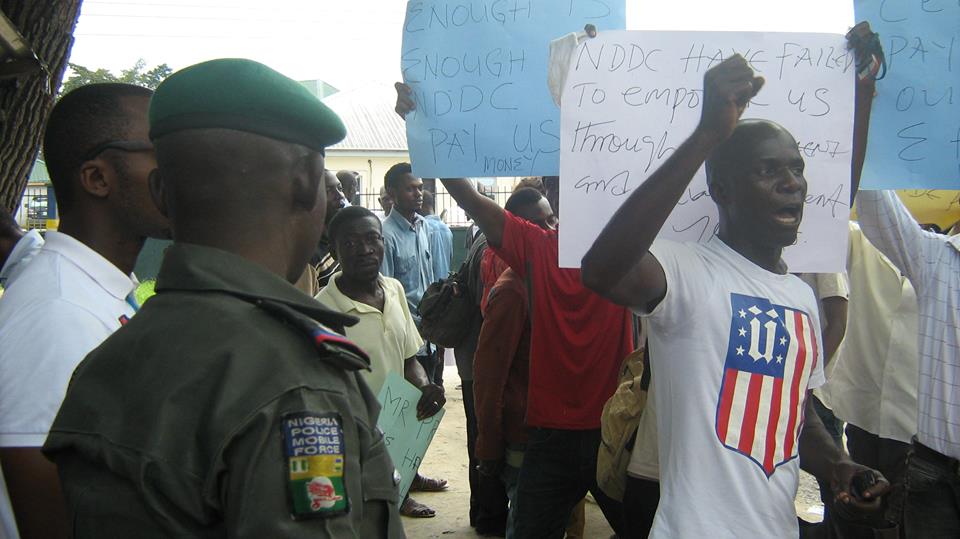 The protesters, under the aegis of Niger Delta Volunteer Services Scheme, and Celtic Pride & Event Limited( employees of Turnah), poured encomiums on the EFCC for “its tireless efforts against corruption” and for prosecuting George Turnah, whom they accused of “inflicting pain and suffering” on them and making them to be “primary victims of corruption”.

Henry Eniye Smith, coordinator of the group, called for the speedy trial of Turnah. “We humbly appeal to the trial judge, Justice Ibrahim Watilat for speedy trial against corrupt individuals(sic) to alleviate our pains and suffering for the sake of justice and our social development”, he said.

Some of the placards carried by the protesters read: “Enough is Enough in Niger Delta”; “Thank you EFCC”; “George Turnah must return the money that is meant for the development of the youths”: “Pay us, George Turnah”, “Celtic Pride, Pay us our Pending salary”; “Thank God for Magu”, “EFCC, help us to retrieve our seized salary from former S.A youth to NDDC.”

Mrs. Akpos Ekisowei Receiving the Protesters on behalf of the EFCC.

Smith also pressed for the confirmation of the Acting Chairman of the EFCC, Mr. Ibrahim Magu. “We hereby use this medium to direct(sic) the National Assembly as a matter of urgency to duly confirm Mr. Magu as a substantive Chairman of EFCC for more effective service”, he said.

The protesters were received by Mrs. Akpos Ekisowei on behalf of the EFCC. She received a letter brought by the protesters and promised to convey their message to the appropriate authorities.

Turnah is standing trial before a Federal High Court sitting in Port Harcourt, Rivers State on a 12-count charge bordering on obtaining money by false pretence; money laundering and abuse of office.