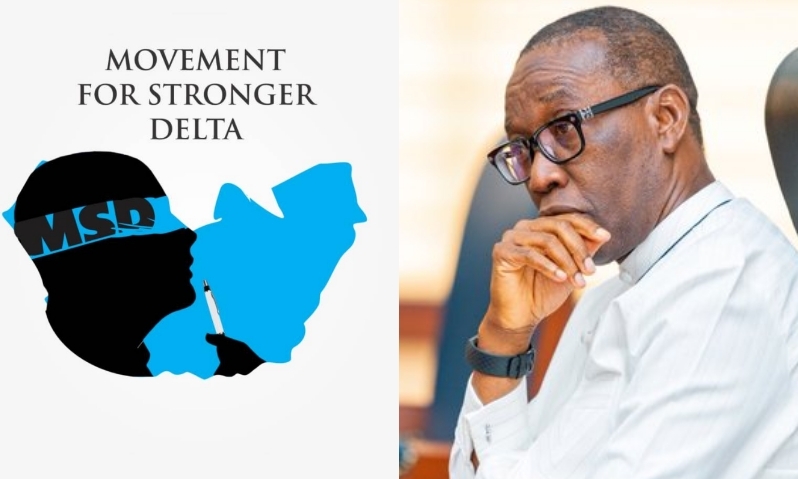 Picture Inset: From right, Governor Ifeanyi Okowa and the banner of Movement for Stronger Delta

It is a shame seeing the so called Movement for Stronger Delta celebrating the clearance of Francis (Sheriff) Oborevwori to contest in the Delta PDP primaries.

What took him so long to be cleared if truly there were no K-legs in his identity, age and certificates? All others who went for the screening came out pure but it has taken a whole three more weeks, with plenty plenty affidavits and repackaging, for him to be cleared.

Deltans don’t know well that it was all manipulated with money and connections as has been believably alleged in many quarters, but they are not fooled.

The true leaders of Delta PDP and the delegates also know well that deceiving the people with staged clearance doesn’t solve the real issue because the manipulated doesn’t absolve Oborevwori from further judicial interrogation. That is the real danger for Delta PDP and a waiting disgrace for the image of Delta State.

Recall the case of Salisu Buhari who also manipulated his age and certificates to become Speaker of the House of Representatives in 1999 to also be called Right Honourable as Oborevwori is now called. He was also cleared as Oborevwori is now said to have been cleared, but it did not take time before it all fell like a pack of cards.

Further investigations which the PDP and the Electoral Commission were not faithful enough to do proved that he had committed forgery on both his age and certificate. He was forced to resign, disgracefully.

After lying and lying for years, he finally confessed and apologised that he forged the certificates and President Olusegun Obasanjo granted him pardon.

So, there is no surprise and it is not any big deal that somebody is still fooling himself.

Degi of Bayelsa was also cleared by his party and INEC, perhaps also through the same kind of manipulations, affidavits and bribery that may have obtained in the case of Francis, but where did it leave the APC in Bayelsa State? Perhaps, the party would have learnt some lessons through that.

Our people say, “na foolish person go allow stone when him done see come blind him eye.” May that not be the case of Delta PDP. Amen.

We trust that the PDP leaders, elders and the delegates, especially, will be wiser to learn from other people’s experience and don’t buy the bad market of Oborevwori.

On a lighter mood, I wonder why some few liars call themselves “Movement for Stronger Delta,” to deceitfully give the impression that they are many, on ground and strong.

Check their Facebook page, they are only 40 members. Is that what they call a movement? Most possibly, the actual members may be less than 10 people while others are invited friends. They can’t even gather up to 100 people to join them. Yet they are deceiving the people that they are a movement. Same scammers as scam RT HONs.

Deltans know that the governance of their state is not a ping-pong and they will never allow scammers to deceive them and destroy their state.

THE ARENA: Now that Sheriff has been Screened and Duly Cleared…
THE ARENA: Edevbie’s Masterplan Best for Development, Peace and Harmony in Delta
Advertisement