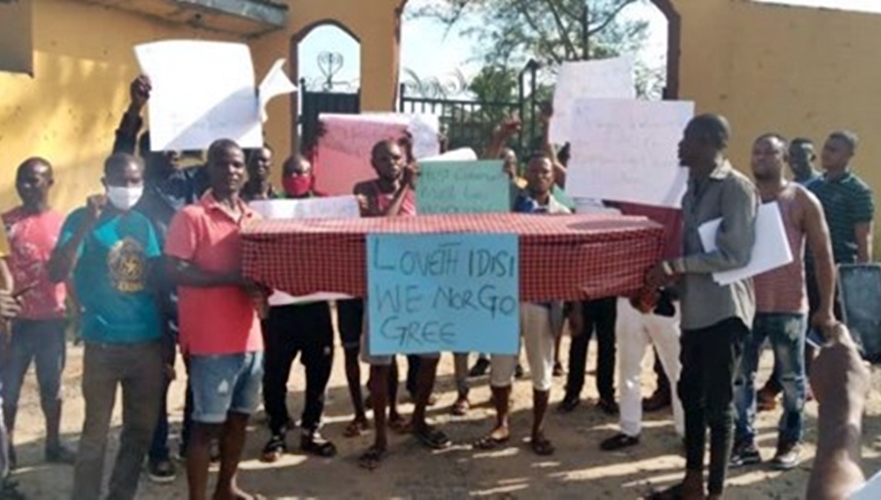 People of Mosogar Kingdom in Ethiope West Local Government Area of Delta State, on Tuesday May 12, took to the streets of the town in protest to what they termed as unjust disqualification of its citizen as Provost of the College of Education in the town.

In the petition addressed to the Governor, obtained in Mosogar, the Mosogar Development Union, specifically mentioned that in a just concluded Provost interview, they observed sadly that their own son (Dr Moses Ogheneovo Omayuli) who was shortlisted, cleared, and interviewed was unceremoniously disqualified after coming out as the overall best with 84.90% among those interviewed, on the basis of age.

All efforts to reach the Commissioner for Higher Education Prof. Patrick Muoboghare through his mobile phone number was unsuccessful, neither did he respond to a text message sent to him.

The protest letter signed by Chief P. Ojarikre (the Ugo of Mosogar Kingdom) Chief (Col) O.C Akporokah, (the President General of Mosogar Development Union, the President of Mosogar Elite Forum, Comr Monday Odaka, Comr Oki Ebeigbe, the Mosogar Youth Forum President and Madam Margaret Igah, (the head of Mosogar Women forum) alleged a careful perusal of the advert for the post of provost viz-a-viz the CVs of the people shortlisted and interviewed shows clearly that some of these persons did not meet the academic experience needed for the position, adding that as the host community there is a well orchestrated plan by the governing council and the Ministry of Higher Education to ensure that the kingdom is not only short changed but also mocked and relegated to the background.

Speaking to Journalists on the crisis, the former council chairman of Ethiope West, Dr Wilson Omene cited instances of Provost appointments made despite their ages, saying their son should be avail of this opportunity to serve in the College as a substantive Provost.

According to him “in the just concluded Provost interview, we observed sadly that our son, Dr Moses Ogheneovo Omayuli who was shortlisted, cleared and interviewed was unceremoniously disqualified after coming out as the overall best with 84.90% among those interviewed.

“The reasons given for his disqualification is totally unacceptable to us as a community for the following under listed reasons:

“Meanwhile, the Permanent Secretary Establishment, Asaba, Mr. Joseph Uwanogho, cleared him stating he is still within the age bracket of 60 years as advertised, hence he is qualified to be qualified interviewed. This we feel is not just acceptable but also inconsistent with the previous practice for College of Education in the state.

“For example; Dr. D.D Whawo, was appointed a substantive Provost of College of Education, Mosogar in 2013 at age 62 and retired at the age of 65 years.

“Prof. Emmanuel Ojeme, was appointed Provost of the same College of Education, Mosogar in 2015 at age 63 and left at the completion of his tenure in March, 2020. Same is Dr. Ukadike, Provost College of Education Agbor, who became Provost in 2016 at the age of 62 years and still in service.

“This is not to mention, Mr. Otalor, the Registrar, College of Education, Agbor whose appointment came at the age 57 years as against 55 years stipulated and still in service.