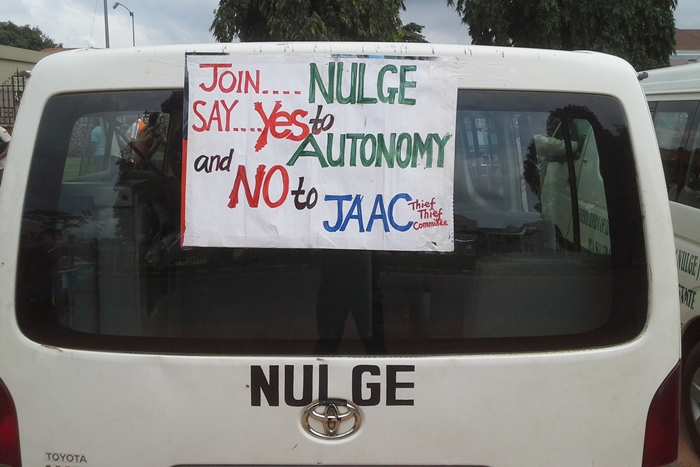 The Nigeria Union of Local Government Employees (NULGE) Delta State Council has taken the quest for local government autonomy to the Delta State House of Assembly (DTHA) with a plea for a speedy passage of the bill when received from the National Assembly.

The peaceful protest to the legislative complex which witnessed a massive turnout of the Union members from across the state, was led by the state Chairman, Comrade Ezekiel Okwudi in company of a national representative and member of the board of trustee, Barr. Chief Luz Owuru.

Receiving the local government employees, Speaker of the Delta State House of Assembly, Rt. Hon. Sheriff Oborevwori flanked by principal officers of the House, warmly welcomed them and quickly joined the union members in their solidarity song.

While assuring of the preparedness of the House to do justice to the demands of the union, Oborevwori appreciated Delta State NULGE for a peaceful presentation of their protests and agitation.

Earlier, presenting the Union’s request to the Speaker, a National Trustee of NULGE, Barr. Luz Owuru, who represented the National President, submitted that with the events of the present days, one can see that there are sentiments, agitations and continuous complains from the local government workers because of the observed ills in both administrative, financial and political structure in the local government.

According to Barr. Owuru, He said, “Mr Speaker, many councils can not pay salaries, unemployment all the way, no infrastructure. Hence, the local government workers realizing the only way we can correct these ills, is to ask for Financial, Administrative and Political Autonomy because that is the only way these things can be corrected.

Moreso, realizing the constitutional role of your Honourable House, we have come to plead, beg and request that you join this moving train by granting the local government system autonomy. By voting massively towards this regard, so that at the end of the day, this dream will be realized. If it is done, it is not for these persons you are seeing here but Nigerians at large and by so doing, Mr Speaker, you will write your name in Gold and we know you cannot afford to leave us alone.”

Speaking to journalists, NULGE Chairman, Delta State Council, Comrade Ezekiel Okwudi said that the union was at the House of Assembly to do the needful hinting that the State Governor has given his assurance of granting the much desired autonomy to the local government councils when the bill is passed.

“The last meeting we had with the Governor, Dr. Ifeanyi Okowa, he gave his words before the national leadership of NULGE, before the SEC members in section and before his own Excos that Delta State is going to be one of the states that will give a speedy passage of autonomy peradventure it comes. So we are here today just to fulfill all righteousness because we know that Delta will be the first state that will grant autonomy in Nigeria.

Comrade Okwudi further stated that the agitation is not all about issues of salaries of local government workers but that the grassroots must be developed averring that there is no structure in place because the Local government system has gone into extinction.

High point to the meeting was the presentation of a position paper which captures the intendments, the struggle and what NULGE expects from the Delta State House of Assembly.