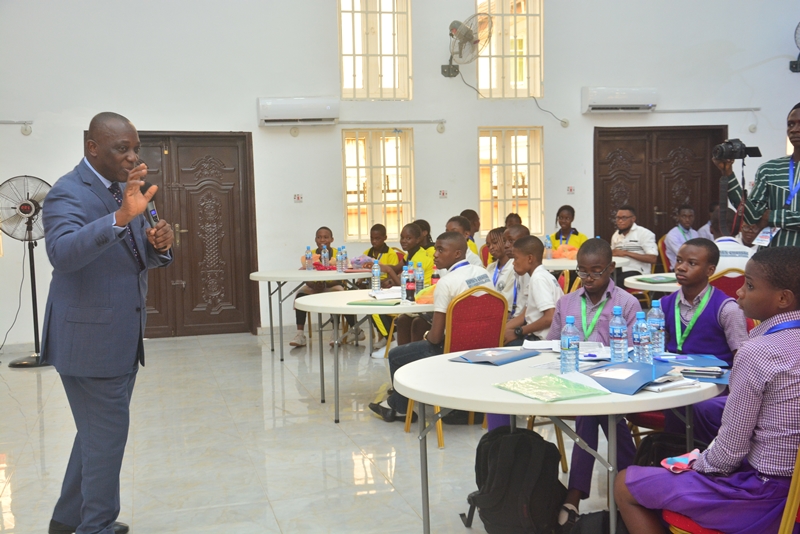 Commissioner for Justice and Attorney General of Delta state, Barrister Peter Mrakpor, Speaking to Teenagers from Secondary Schools in Asaba

Commissioner for Justice and Attorney General of Delta state, Barrister Peter Mrakpor, has said that the only problem in Nigeria is that of quality leadership, noting that the problem is present in all spheres of society including the church, family and the nation.

Mrakpor said if the problem of leadership in Nigeria is corrected, every other thing in the nation will fall in shape as the right leadership will give right direction and quality programmes that will better the lives of the people of the Nigeria state.

In the one-day seminar with the theme: “Leadership Development and Positive Practice,” Mrakpor said leadership has charm, calmness and respect, noting that anybody has the capacity to be a leader in any sphere of life but he must develop the qualities for him to be an effective leader.

Mrakpor told the students that people fail to reach to the point they intend in life not necessarily because of witchcraft as some are made to believe, but their mindset has conditioned them to such low level and hence they have remained practically unproductive.

He said 90 percent of poverty experienced by people is a product of laziness, adding: “If you bind all the witches and demons in the world and send them to the bottomless pit, people will still be poor. So, you must not be lazy.”

Besides laziness as a killer of dreams, Mrakpor identified the television as another cause of poverty for students. He condemned a situation where people, especially parents invest their time on the television and abandon their children to determine their fate.

He stated: “People live in the same house, everybody is watching television, nobody is talking to anyone. Most parents spend their time on the television and leave their children. Such parents are irresponsible.”

The commissioner who spoke on “Success Habits: The Need, goal and accomplishment,” insisted that though good friends could catapult someone to a great height, he said unprogressive friends could lead someone to prison or mortuary.”

He told the 70 students that gathered for the leadership seminar that he signs off over 80 people and commits them to prison on daily basis, adding that the young people are below the age of 24. He said most of these youths have parents, they go to church but their friends lure them in the wrong direction.

He said: “If you have a friend you cannot sleep without seeing, sack that friend. Most cases of rape, armed robbery and cultism are connected to friends. Lesbianism also comes from friendship, so audit your friends.”

The commissioner, who said prior to becoming the state’s attorney general, he was managing only six lawyers in his chamber but now manages about 230 lawyers attached to the state ministry of justice, noted that one’s background cannot determine the future of anyone, adding: “If your father is a carpenter does not mean you will be a carpenter.”

Others who spoke at the seminar include Barrsiter Eserinune Lilian, Mr. Prince Omene and Benedicta Uweru. While Eserinune gave an introductory part of the seminar, Omene spoke on Leadership: Role of leaders, morals, values and ethics of a good leader, Uweru spoke on Gender and Leadership, Leadership and followership.