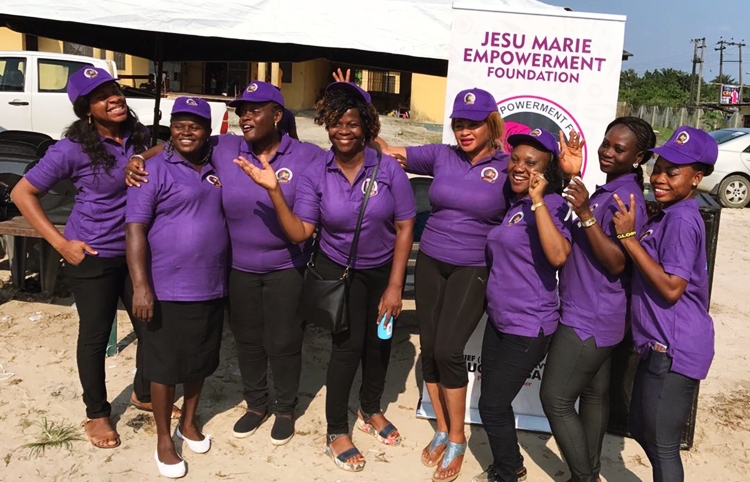 A special intervention in the health sector of Delta State by a non-governmental organization “Jesu Marie Empowerment Foundation”, JMEF has begun with significant success recorded in the treatment of diverse health conditions of patients especially those suffering from preventable diseases.

Speaking on day one and two of the free health programme held at Uwheru and Otor–Udu in Ughelli North and Udu Local Government Areas, the President and Founder of the NGO, Dr (Mrs) Rukevwe Ugwumba, said the intervention is to bridge the gap in the health care delivery system in the State.

Dr Ugwumba, a Consultant to the Senate Committee on Health, disclosed that serious health conditions that require major surgical operations will be carried out at the Warri, Ekpan and Ughelli Central Hospitals which is part of the State government’s partnership with her NGO.

The one-time Special Adviser to former Governor Emmanuel Uduaghan from 2011 to 2015, hinted that a health partner from Canada also supported with drugs worth Five Thousand Dollars adding that the foundation started first with the health intervention as there exist a lot of sick people to contribute to nation development.

The primary aim, Dr Ugwumba stated is to help people who do not have access or lack the finance to access health care.

Beauty Emmanuel who put to birth a set of female twins at the Uwheru Primary Health Care Centre, a lady whose four months old baby was operated of a growth on the neck and another woman with her two little daughters who were suffering from Malaria, were full of excitement and commendation to the Jesu Marie Empowerment Foundation for the health intervention.

Olorogun Felix Ekure, who chaired the Flag off ceremony, lauded the initiative of the foundation noting that government alone cannot do everything for the citizenry.

Over one thousand rural dwellers of Uwheru, Otor-Udu and their adjoining communities with various health conditions were attended to on day one and two of the special health intervention by the Jesu Marie Empowerment Foundation.

The free health care programme of the foundation in Uwheru, took place at the Uwheru Primary Health Care Centre while that of Otor-Udu was held at the Otor-Udu General Hospital.

Those who turned up at the health facilities with identified ailment were screened with due cognizance of their height, blood pressure, sugar and cholesterol levels to ascertain if they are Diabetic or Hypertensive which are silent killers.

Drugs were freely distributed to the patients as prescribed including Mosquito treated nets especially for pregnant women and under five children.

During the exercise, Dr.Ugwumba also distributed clothes to some of the patients.

In a related development, a 60 year old welder based in Ughelli main town has had his Lipoma on the forehead successfully operated on day three of the ongoing special free health care intervention by a non governmental organization, the Jesu Marie Empowerment Foundation at the Ughelli Central Hospital.

The 60 years old Mr. Johnson Omokpaefe, who was successfully operated of a growth on his forehead medically known as Lipoma, said for five years he has lived with the health condition because of money to attend to it.

Mr. Omokpaefe, a native of Arhavwarien community living in Ughelli town expressed deep appreciation to the foundation for the assistance that has put to end the social stigma he had faced for the past years due to the growth on his head.

Other beneficiaries of the health programme described the intervention of the foundation as unprecedented in the area.

The Zonal Medical Director, Ughelli Central Hospital, Dr. Moses Eyovwerhuvwu, during the exercisel said the health intervention by the foundation is a huge complement to the State government’s effort in making health care accessible and affordable to Deltans.

Dr. Eyovwerhuvwu, noted that the foundation’s health intervention is very complementary to what the State government is doing in the health sector considering the socio-economic situation in the country that has shut out millions of people from accessing good medical care.

A political leader in Ughelli North Local Government Area, Olorogun Jaro Egbo and others praised the foundation for the scope of the health intervention which includes surgeries, the quality of medical personnel and specific medications to the identified health cases.

President and Founder of Jesu Marie Empowerment Foundation, Dr.Rukevwe Ugwumba, stressed the need for people to take preventive health measures to be healthy in life.

She said her foundation will continue to impact positively to mankind.

Over Four Hundred persons with various degrees of ailments were attended to by medical personnel comprising ten doctors and five nurses including other support staff of the Jesu Marie Empowerment Foundation.

The impressive turn out at the Ughelli Central Hospital had more of the elderly, with some supported by their children to the venue to take advantage of the special free health care intervention by the foundation.

General health screening and checks of patients Blood Pressure, Cholesterol, Sugar levels amongst others were carefully carried out. Insulin treatments were given to diabetic patients, prescription eye glasses and free drugs were also distributed.