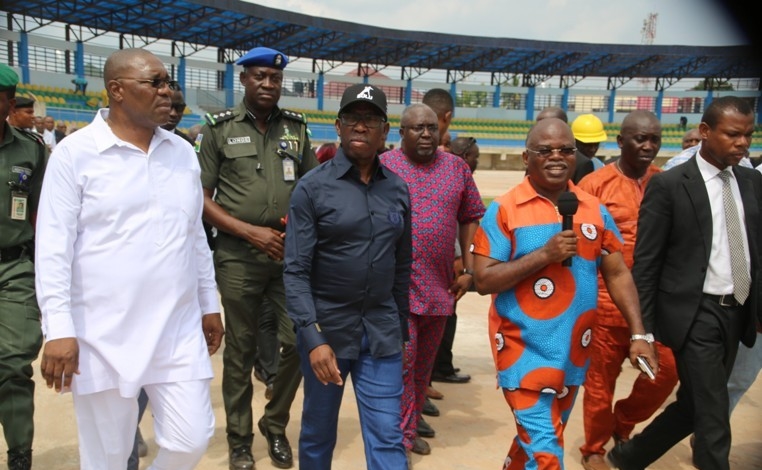 As Delta State prepares to host the 2018 Confederation of Africa Athletics (CAA) African Senior Athletics Competition in Asaba from the 1st to 5th of August, Governor Ifeanyi Okowa has assured that the Stephen Keshi Stadium, venue of the championship would be ready in July.

The governor who spoke during an inspection tour of the Stephen Keshi Stadium Wednesday, June 13, 2018, expressed satisfaction with the pace and level of work at the stadium stating “there is an appreciable increase in the pace of work at the site, a lot of coordinated work is going on as you can see, I will visit again next week, and I hope we will be talking of the finishing by then, I believe the stadium will be ready first week of July”.

“We are recruiting the young ones in the different sporting activities in the state and we want to groom them from this tender age, this is the stadium we will be using when it is completed, it is of international standard and will also attract international competitions. He said stressing that, “a team has been put in place to help manage traffic during the African Senior Athletics Competition in August as a lot of side roads leading to the stadium has been tarred and will be used as outlets for vehicles.”

Meanwhile, the Governor has charged Nigerians to pray for the success of the National Team, Super Eagles as they participate in the forth coming 2018 Federation International Football Association (FIFA) World Cup in Russia which kicks off on Thursday, June 14th, 2018.