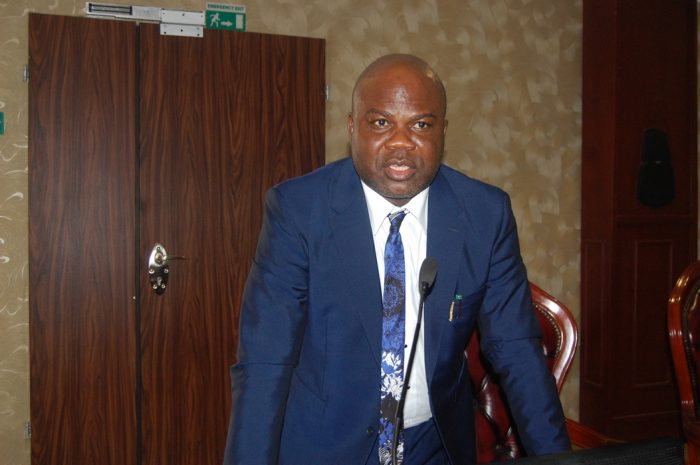 The honourable member representing Ethiope East State Constituency in the Delta State House sf Assembly, Hon. Evance Ivwurie has called on security agencies to intensify their investigative prowess across the vast land beyond the Ethiope River.

This was contained in a press release made available to newsmen.

Hon. Ivwurie queried the reports in some sections of the media where he was apparently quoted out of context in regards to the sighting of an un-identified Helicopter dropping supplies to Herdsmen at the barren area of Ovre-Abraka and Ovre-Eku in Ethiope East Local Government Area of Delta State.

Read the full Press Statement by below;

My attention has been drawn to a report in some sections of the media where I was apparently quoted out of context to have said “I sighted un-identified Helicopter dropping supplies to Herdsmen at the barren area of Ovre-Abraka and Ovre-Eku in Ethiope East Local Government Area of Delta State.”

After the said report went viral, I have been inundated with calls from the general public and security agents on the said “unidentified Helicopter” and I feel it is of paramount importance that I make this clarification in order to set the records straight.

1. Sometime in March 2016, I was briefed by my constituents residing across Ethiope East Mainland; towns/villages and Ethiope East Hinterlands; Ovre-Eku/Abraka/Igun of the sighting by some of them of an unspecified Helicopter said to be dropping supplies in the same Ovre-Eku/Abraka axis.

2. Having been elected as the lawmaker representing the wonderful people of Ethiope East constituency, I have a duty to ensure that my constituents reap the dividends of democracy which includes the protection of their lives and properties.

3. Ten months ago, my constituents cried out to me after the despicable killing of two of my constituents Mr. Philip Akpine and Mr.Francis Okotie in their farmlands in Ovre-Abraka by suspected Fulani Herdsmen. The records are there and can be verified. I was briefed of the heinous activities of herdsmen within the Eku-Abraka axis especially the Ovre-Eku and Ovre-Abraka environs which is known to be a safe haven, dwelling and business place for Fulani Herdsmen in their masses and their herds of cattle also in their masses.

4. My constituents also briefed me of the daily attacks, beatings, flogging and molestation they are receiving from Presco Plc Soldiers in the area. They reported that the location is also a safe haven for the nefarious operations and activities of Presco Plc and Newcross Petroleum Ltd illegal annexation and occupation of Ovre’ Abraka/Eku/Igun lands wherein they have seized and established a military base/ unit that dehumanized them daily.

5. As the lawmaker representing my people who have become susceptible, defenceless and vulnerable to this menace, I took up the matter on the floor of the Delta State House of Assembly and even reported to the security agencies including the former Delta State Commissioner of Police. The Herdsmen and Presco Plc have recently intensified their escapade and atrocities against my exposed constituents- killing and Kidnapping them, maiming, rapping and attacking them as were the case of Mr. Philip Akpine and Mr. Francis Okotie who were murdered in cold blood by the Fulani Herdsmen.

6. Determined to bring an end to the insecurity foisted on my people, sometime in April of 2016, I launched a campaign tagged “Operation Arrest, Meet and Engage Their Sponsor” which was aimed at identifying the criminal elements of the Herdsmen that were said to have been unknown, meet their “sponsors” and engage them”.

7. During the launch of that campaign, we combed the entire area of Ovre-Eku and Ovre-Abraka where these herdsmen reside in company of the Divisional Police Office (DPO) Abraka, Mopol Unit Commander, Mobile Policemen, Vigilante etc and our discovery in the area was startling.

a. Immediately they sighted us, the herdsmen who in our estimation numbered about 500 to 2000 seen in the various parts of the vast deserts with their herds numbering in thousands fled into the interior regions of the area leaving behind their herds of cattle. Like the Biblical saying goes, “The wicked man runneth when no one pursueth.”

b. Much to our chagrin, we realized that they have several escape routes within the adjoining forest and bushes.

c. Though no arrest was made on that day, we thought we had sent a message to the herdsmen that it won’t be business as usual as regards their activities.

8. The coverage of my efforts and campaigns over this strange development and occurrences in Ovre-Eku, Ovre-Igun and Ovre-Abraka are well recorded, documented and escalated by the media to keep every individual and institutions abreast with the happenings in my constituency.

9. Ten months after, the dangerous activities of these herdsmen have continued in the area unabated. A case in point is the audacious and dastard killing of Mr. Sunday Couple and Mr. Eyabigun Akpovena two of my constituents this past December of 2016 in the same Ovre-Eku/ Ovre-Abraka axis.

10. Let me state emphatically here that my constituents reside across Ethiope East Mainland and Hinterlands. Those staying in the Mainland of Abraka, Eku and Igun township also go to the Hinterlands across the River Ethiope for farming and hunting, and as their Representative and Lawmaker, they have confidence in me hence they reported the matters to me.

11. At no time did I ever informed or say to anybody that I personally sighted a Helicopter or an unidentified Helicopter in the said area more especially as I do not live, farm or work in the Hinterlands of Ovre-Igun/Eku/ Abraka. But specifically, my constituents reported that to me.

12. I did not and I never raised alarm that I personally sighted or that I was there and saw an unidentified Helicopter. As I have told the DSS and NPF; my constituents brought the information to me and they bring me all kinds of information regarding their experiences and what is going on, and it’s my duty to evaluate them. I have not behaved inappropriately as I have sufficient information to support my claim that my constituents duly reported to me and indeed informed me that an un-identified Helicopter usually land in Ovre’ Eku/Abraka axis and it was not a classified report and that’s why I refused to jeopardize the information.

13. I didn’t want to help to compound the issue. A lot of security information get published daily, whether falsehood or truthful and it’s the duty of the security architecture to visit the mentioned site for evaluation of the claims to liberate my constituents from the reality of the apparent land mines they have been thrown into in their own land by the Herdsmen and Presco Plc.

14. On a final note, it is based on the above premise that I urge the security agencies to properly investigate the activities of Presco Plc and the criminal elements of the herdsmen and bring those of them culpable of any criminality to book.