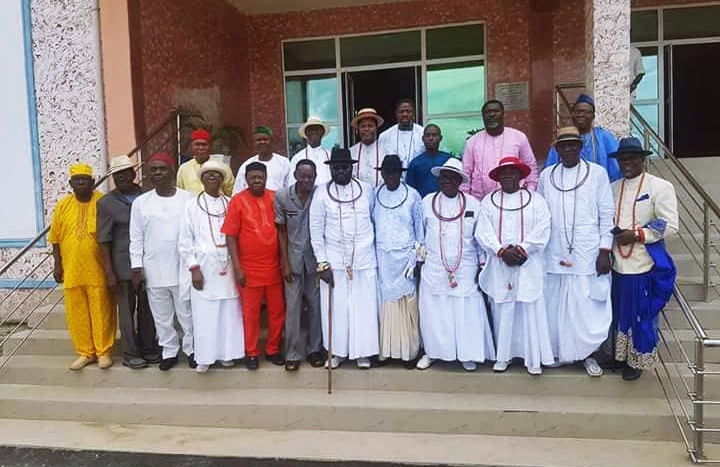 Isoko and Itsekiri Leaders in a Group Photograph after the Meeting at Isoko Unity House, Oleh

The leaders of Itsekiri ethnic nationality and the umbrella body of the Isoko nation, Isoko Development Union, (IDU), Delta state, Wednesday, September 5, 2019 met in Oleh, headquarters of the Isoko South local government area of the state over Delta South senatorial district seat, with a call on Isokos and Ijaws to cue behind the Itsekiri ethnic nationality for the senatorial seat whose turn is to produce the next senator to represent the people.

The call which was part of the resolutions reached at the end of the brotherhood visit of a delegation from the Olu of Warri (Ogiame Ikenwoli) led by the Ologbotsere of Warri kingdom, Ayiri Emami to the leadership of Isoko ethnic nationality, at the Isoko Unity House, Oleh and the need to strengthened the bond and family ties that have existed between the two ethnic nationalities.

The leaders of the two ethnic nationalities also stressed that the age-long rotational power agreement between the Ijaws, Isokos and Itsekiri for Delta South senatorial seat was not based on political party consideration, but hinged on the principle of fairness, justice and equity.

“The rotational agreement for the Delta South Senatorial Seat between the Ijaw, Isoko and Itsekiri dated back to the second republic, to avoid a situation where the three tribes will fight themselves. From records, Ijaws and Isokos have gone there twice while Itsekiri has only gone there once. Now it is the turn of Itsekiri to go and represent us and we are appealing to our brothers from Ijaws and Isoko to support us on this course for equity.”

While stressing that the agreement “was not based on political party”, Mr. Mene went down memory lane to mention occupants of the position, like late Justice Atake, followed by Ijaw National Leader, Edwin Clark, late Francis Okpozo, before Stella Omu represented the district in the current republic between 1999 and 2003, when James Manager took over and remained in the position till date “like a broken record”.

Mr. Mene, asserted that it was the turn of Itsekiri to produce the next Delta South Senator in 2019, assuring that Itsekiri nation is committed to ensuring that the person that will emerge will represent the Ijaw, Isoko and itsekiri interest, just as he noted that the brotherly engagement with the Isoko leaders will be extended to their Ijaw counterparts.

In his response, the President General of Isoko Development Union, (IDU), Mr. Iduh Amadhe attributed the non rotation of the Senatorial seat to various individuals from each ethnic nationality being zoned to failures on the parts of political leaders, adding that it will amount to “practicing political brigandage” against equity and justice for anybody in the senatorial district to seek for 4th or 5th term.

“To correct this abnormalities, the Olu of Warri, key traditional rulers from Isokos and Ijaws and the political elites from Delta South senatorial district should meet and sign a memorandum of understanding for each of the ethnic nationality occupying the seat at least a maximum of two tenure. We, Isoko, Ijaw, and Itsekiri must come together and sign agreement of maximum of two terms for each ethnic nationality as it affects Delta South.”

Other Isoko leaders, Idodo Umeh, Dennis Etaluku, and Mike Osige, who corroborated the IDU President General’s statement, however urged Itsekiri nationality to as a matter of urgency and importance call for a meeting between the three ethnic nationalities that made up the Delta South senatorial district seat.

They assured Itsekiri nation the full support of Isoko people in pursuit of their senatorial ambition in the forthcoming general elections, affirming that as a way to end the current political logjam, the Itsekiri people who they described as trustworthy and straight-forward should be backed for the senatorial seat.

In an interview with Journalists shortly after the meeting, the Prime Minister of the Warri Kingdom, Mr. Ayiri Emami who led the Itsekiri delegation expressed happiness with the disposition of Isoko leaders and assured that they will engage their Ijaw counterparts with optimism that they will key into the restart of the rotation agreement.