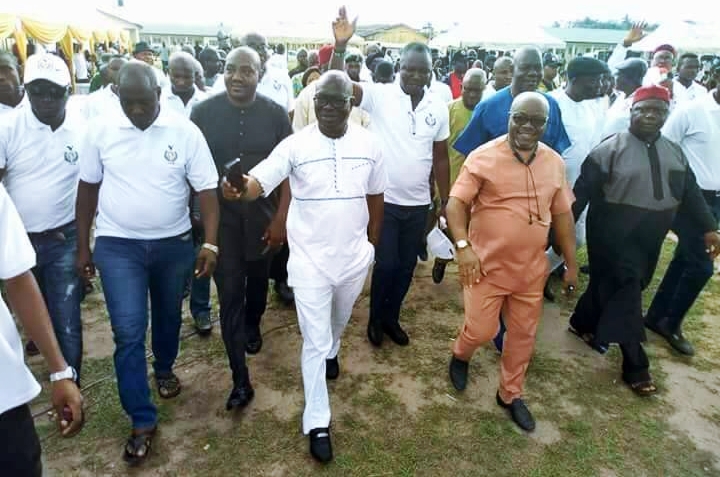 A new political group of like minds for the promotion of good governance through the instrumentality of the Personal Voters Card (PVC), known as the ISOKO POLITICAL EXODUS, (IPE), has been inaugurated in with a mandate to reform the Isoko political landscape by rescuing it from impunity and entrench fair play and responsive governance at all levels.

The group which was launched and inaugurated on Sunday at the Isoko Central School, (ICS), Oleh, headquarters of Isoko South local government area of Delta state, called on all well-meaning Isoko people of good will to come out and give it support and key into its divine ideology so as to bring back “our electoral value through the election of God fearing representatives.”

In an address delivered at the occasion, the National Coordinator, Isoko Political Exodus, (IPE), Dickson Fine Boy Ebegbare, disclosed that Isoko Political Exodus (IPE) is an association of voters within Isoko land irrespective of party affiliation, explaining that “Isoko Political Exodus is about a year old and still counting. It was borne out of the biblical concept of the right and ideal time as contained in the book of Ecclesiastes chapter 3.”

According to Hon. Ebegbare, the present political process in the land is saddled with maximum impunity, disrespect, abuse of political offices and total neglect of the electorate, and therefore enjoined all Isoko people of good will to come out to support IPE in this divine mission, so that together they can transit to a glorious Isoko of their dream.

“It is no gain saying that Isoko has lost its political value in recent times. This is a sad result of the process where some of our representatives were handpicked by a few individuals rather than through transparent democratic process. We have carefully reviewed our political standing and relevance in the scheme of things as it relates to equity amongst our sister’s ethnic nationalities and the result is abysmal failure.

“We are thus very challenged to begin to think of Isoko interest collectively as a forum of like minds at this material point in time. And so, the almighty questions are; how did we get it wrong as an ethnic group? Where is the elder’s council as it was in the time of the Ubekus, Omus, Uredis, Egbuwokus, Okpozos and the Mallam Obis who do not have any dealings with the day to day running of government business? And so can speak and creditably negotiate on behalf of the Isoko nation. How come government appointees now selfishly speak for the Isoko nation without due consultation?

“It is on this note that the Isoko Political Exodus has been working round the clock in a bid to proffer solution to our lingering problems. Today, we have come to terms on how these issues can be best tackled head on. First, as a people, we must separate operational leaders from the elders council whom we must promote to speak for the Isoko people. We must also shun money politics (bread and butter) and promote enduring democratic values for the electorate to whom power actually belongs.

“Today, the winner takes it all as votes no longer count. The bourgeoisie have taken over our political inheritance through their infamous investment in the political space. We must from now begin to see governance process as our priority and not the peanuts you are given during elections. We must consistently advocate the power of the PVC and vote the right persons to represent us. Yes! It is possible.

“We must respect and promote our unifying institution, the IDU which our politicians have tried to reduce to a mere co-operative while UPU a contemporary is standing, making their rightful demands from all the tiers of government. And it is working.”

Ebegbare however noted that the Isoko Political Exodus has over 10,000 voluntary members who are well briefed and ready to vote the right candidates in subsequent elections, stressing that since the formation of Exodus movement, they have not settled any form of dispute even as their operational funds are voluntarily raised in times of need and it is working.

“We have critically reviewed the activities of past political office holders and we have come to terms that our illustrious son, father and leader, Comrade Ovouzorie Macaulay has done well as his stewardship account is still there unchallenged. The result of his human capital development and infrastructural development are unmistakable. It is our prayer that God alone will reposition you to the Glory of God and to the benefit of humanity.”

Meanwhile, the group has installed the Delta state former Secretary to the State Government, (SSG), Ovuozourie Macaulay as its grand patron.

In his acceptance speech, Macaulay stressed that “I am accepting the patronship on the ground that you will stand on your aims and objectives. In the cause of the struggles people are going to be hurt and bruised, I am not afraid of struggles, 20 years of my life was used for fighting struggles. I am not new to struggles I am going to face today.”

On the way and manner politics was been played by some individuals in Isoko, Macaulay informed the mammoth crowd that “Not everyone of us came into politics because of stomach infrastructure, at every particular time persons or group of persons must stand to defend the Isoko nation. I have not played clannish politics in all of my life, Isoko must be one and we must learn how to stop bringing our people down. Where is Isoko today in the state and federal governments no where.” he lamented.

Earlier, the chairman of the occasion and Delta state commissioner, Public Complaints Commission, Mathias Eto, who commended the formation of the Isoko Political Exodus, bemoaned the situation where appointments were only been given to irrelevant boyfriends and girlfriends by government officials adding that “Appointments are no longer given to those who have the interest of Isoko nation at heart. Appointments given by Ovuozourie Macaulay were relevant and meaningful and brought glory to the Isoko land.”

Hon. Eto while throwing his full support behind the group, made it clear that no amount of propaganda will make the people to vote for any politician that has failed Isoko nation, saying Isoko will no longer sell their birthrights, and enjoined Isoko people watch out.

“If PDP is not doing well and the APC is doing we of course we will vote for the APC. If you are performing well and you are in APC we will vote you. Any Isoko person in office is a servant but if you want to make yourself a leader Isoko will reject you.”

IMG to Okowa, Your Government Has Betrayed the Trust of Isoko People
Peddlers of 1% Delta State Budgetary Allocation for Isoko Nation are Enemies of the People – Delta Assembly
Advertisement