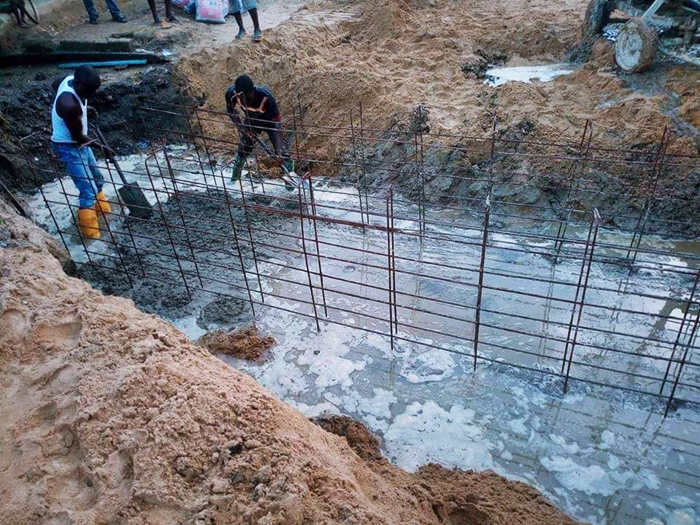 People of Ikpide-Irri riverine community in Isoko South local government area of Delta state, have protested against an ongoing substandard road contract awarded to PORTPLUS Nigeria limited, a marine service company, at the sum of N736, 404, 555.60 by Governor Ifeanyi Okowa.

Raising the alarm of the substandard job being executed by the contractor who is an indigene of the community, the people disclosed that instead of the construction of both ways drains on the road and using of rods and other materials specified in the drawings and Bill Of Quantity, (BOQ), the contractor decided to use substandard materials.

“The contract is a concrete pavement road project awarded to our son who is a friend to governor Okowa. But its so unfortunate that the contractor, our own son dumped the (BOQ) and constructed one sided drains, used substandard materials to construct the culverts, the stone base was poorly done as well, why in some areas no drains, resulting to flooding of the community whenever it rains.” one of the community leaders lamented.

According to contract documents obtained by our correspondent, governor Okowa awarded the contract sometime early 2017 to PORTPLUS Nigeria limited owned by one Mr. Immanuel Omoefe, said to be a crony and one of those who contributed to Okowa’s 2015 governorship election.

A further check by our correspondent revealed that PORTPLUS Nigeria Limited is a wholly owned Nigerian Company incorporated in 2004 with registration number (RC No 607566) to handle operations as a Marine Logistics and Support Services provider with Mr. Immanuel Omoefe as its chairman/CEO.

Speaking on the contract few months ago, the President General of the community and an uncle to the contractor, Mr. Michael Omojefe had told our correspondent in clear terms that the road contract was a ‘Kola-nut’ contract given to his younger brother by governor Okowa for his (brother’s) contributions to Okowa’s 2015 governorship race as such no one has the right to question his brother how he executes the contract.

Condemning in strong terms the ongoing substandard job by PORTPLUS Nigeria limited, in a statement by a pan Isoko group, Isoko Monitoring Group, (IMG), fighting underdevelopment, injustice among others in Isoko nation, Delta state and Nigeria in general, called for strict adherence to the Bill Of Quantity and professionalism in road constructions, warning that failure to follow the rules, it shall be left with no option than to invite anti-graft agencies into the contract to do the needful.

The statement which was signed by IMG President, Mr. Sabastine Agbefe, and made available to Journalists, expressed dissatisfaction over a situation where a marine company that has no history of road construction anywhere would be awarded a contract of almost a billion naira by governor Ifeanyi Okowa.

In another strong worded petition by some concerned indigenes of the community, addressed to governor Ifeanyi Okowa, signed by their counsel, Mr. C.F. Ebu, of the legacy chambers, Asaba, condemned the substandard job being done by the contractor and called for strict adherence to the Bill Of Quantity, (BOQ) and the drawings.

The petition entitled “Re:Construction Of Ikpide-Irri Township Roads: Protest Against The Substandard Job And Call For Strict Adherence To The Bill Of Quantity.”, vowed that failure to ignore all the demands made shall attract the invitation of the Economic and Financial Crimes Commission, (EFCC) and other anti-graft agencies into the contract.

“In a fact finding mission with a team of Engineers, it was obviously discovered that the road was not being constructed according to the specification of the Bill Of Quantity (BOQ) and engineering drawings standard as a result of that, the tendency of the road project to failure soon will be imminent.

“We are using this medium to appeal to you as follows: That the drains should be reconstructed and on both sides with its normal length and depth of 750mmx750x150mm thick using the normal materials (Y 10mm dia rods specified in the original Bill Of Quantity (BOQ) and the drawings.

“That the culverts should be reconstructed because the culverts construction was not met as rods used was 10mm at interval of 300mm instead of 16mm at interval of 150mm spacing specified in the drawings and the original Bill Of Quantity (BOQ) and concrete mixed was very poor. Also the size specified in the drawings was not professionally followed.

“That the stone base filling should be revisited because the filling height laid was 50mm and not in conformance with 150mm thick stone base that was specified on the drawings and Bill Of Quantity (BOQ).

“We therefore cautioned that the contractor handling the road project follows what was specified on the Bill Of Quantity and standards of road construction process to make the road durable. Note that any denigration from the above stated demands shall leave us with no other option than to invite anti-graft agencies into the contract.” the petition said.

Concerned indigenes of the community who have been critical of the substandard job said their lives and that of their families are currently under severe threats following their critical stance on the job, alleging that at the moment, the handlers of the contract were already making plans to frame them up and use security agencies to arrest them as well as launch an attack on them.

Speaking on behalf of the Chairman and CEO of PORTPLUS Nigeria Limited, the site engineer, who simply identified himself as Frank Nnamdi Ajoku, denied the substandard job story, saying “We are working according to the Bill Of Quantity. Though we did one side drain according to the BOQ, but because of the terrain, it would have been better to construct two sides drainage in the community.”

Also, calls put to the state commissioner for works, Mr. James Augoye, were not answered, but a director in the Ministry who does not want his name mentioned disclosed that the state governor has directed that team of engineers from the Ministry to visit the site to inspect the standard of job done so far.

Meanwhile, a mild drama ensued on Tuesday when one of the substandard culverts constructed by PORTPLUS Nigeria limited collapsed in the presence of the team from the Ministry of Works, Asaba, sent by the governor to look into all the issues raised by the indigenes of the community.

It was gathered that in a bid to cover up his contractor brother, the community President General, Mr. Michael Omojefe and the site engineer, Mr. Frank Nnamdi Ajoku lied to the Ministry of Works team that the culverts were constructed with 16mm rods as specified on the BOQ and the drawings, but immediately they took the team to another area in the town, an indigene ran to informed the team that one of the culverts has just collapsed.

On returning to the collapsed culvert, the team was shocked to discover that the contractor instead of using the specified 16mm, he used 10mm rods for the culvert construction and immediately the culvert was sand filled, at this junction, it was learned the community President General had to take the team to his brother’s house, where an undisclosed amount of money was allegedly offered the team as a kola-nut.