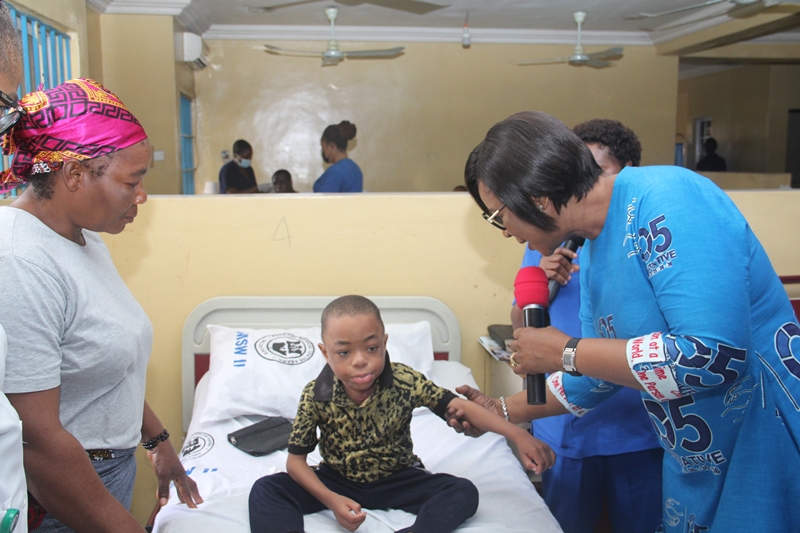 The wife of the Delta State Governor and Founder O5 Initiative, Dame Edith Okowa (Right) checking up on Master Gift Oghenemaro, a beneficiary of O5 Initiative and a patient at Federal Medical Centre, Asaba when she visited the Orthopedic Surgical ward to present a cheque of 6.2 million naira to offset medical bills of 25 patients as part of activities to mark the 2022 celebration of the International Day of Charity. (PIX: NORBERT AMEDE)

In commemoration of the 2022 International Day of Charity, Wife of Delta Governor and Founder O5 Initiative, Dame Edith Okowa has reached out to large sections of underprivileged persons within and outside the state.

Riding on the mantra of the O5 Initiative of reaching out to all categories of persons in need in line with Matthew 25: 35-36, Dame Okowa led her team to hospitals, communities and settlements where various food items, clothing, household items, including cash gifts were presented to the beneficiaries.

As part of this year’s charity day celebration, the O5 Initiative team visited ex-lepers who are sheltered at Ossiomo Settlement, comprising of people from Delta, Edo and Balyesa states, in Orhionmwon local government, Edo State, came out in their numbers to receive the items donated to them by the 05 Initiative.

Addressing the persons affected by Leprosy, Dame Okowa who spoke through the Director General, 05 Initiative Mrs. Oghenekevwe Agas said the gesture was part of the 05 Initiative mandate to impact lives and bring hope to the hopeless.

She expressed the hope that the items would improve on their wellbeing and to give them a sense of belonging, that they were not forgotten.

The governor’s wife called on well spirited individuals and organizations to reach out to the needy and vulnerable amongst them, as the globe mark the world charity day this September.

Earlier, the Director, rehabilitation department, ministry of Women Affairs and Social Community Development, Mr. Peter Okocha and his Assistant, Mr. Mill Yekwe were in the government house Asaba, to receive similar food items and other essentials for onward distribution to persons affected by Leprosy in the state.

They expressed gratitude to the governor’s wife on behalf of the beneficiaries, adding that it was first of its kind and prayed God to take Dame Okowa to higher heights.

The team of the 05 Initiative also reached out to ex-lepers in Eku.

Thereafter, the governor’s wife visited the Federal Medical Centre, Asaba and Asaba Specialist Hospital before where presented the sum of N11.2million naira to offset the medical bills of indigent patients.

She told the patients that God is using the 05 Initiative, as instrument to meet the needs of the patients who could not afford their bills after being discharged from the hospitals.

While presenting the cheques to the hospital management, she prayed for God to speed up the healings of all patients in the hospitals both those whose bills were paid and others.

“There is every reason to praise God. Some people enter theatre but do not come out but all of you came out, it is God’s handwork. All of you must go to your homes. God will give all of you speedy healings. Trust God because he is able to take care of you. Leave your burden for God. God says all of you will rise,” the governor’s wife said.

A total of 53 patients drawn from both the Federal Medical Centre and Asaba Specialist Hospital benefitted from the medical bill of N11.2million paid by the governor’s wife.

Wife of Delta Governor and Founder O5 Initiative, Dame Edith Okowa (Left) presenting a cheque of 1 Million Naira to a female Keke Rider, Mrs. Ufoma Michael to offset bills up keep of her family as part of activities to mark the 2022 world Charity Day celebration while the Director-General of the O5 Initiative and Permanent Secretary ministry of Women Affairs Community and Social Development, Mrs. Oghenekevwe Agas watches (PIX: NORBERT AMEDE)

Besides the medical bills of the patients settled Dame Okowa, she also presented the sum of Five hundred thousand Naira to Mr. Lucky Monday an Motorcycle Commercial Rider (Okada) whose wife delivered a set of triplets and one million Hundred Naira to another lady, Mrs Ufuoma Michael, a female TriCycle rider (Keke) who defied all odds and took to tricycle commercial riding.

Chief Medical Director of Federal Medical Centre Asaba Dr Victor Osiatuma and Dr. Peace Ighosewe of the Asaba Specialist hospital in their separate remarks   commended the governor’s wife for her love for the less privileged in society.

They said “Her passion for helping people will never go unrewarded. She has a track record of showing love to people. Everybody may not have the ability to do it at Her Excellency’s capacity but you can show love to someone next to you.

Wife of Delta Governor and Founder O5 Initiative, Dame Edith Okowa (Right) presenting a cheque of 5 million Naira to the Chief Medical Director, Asaba Specialist Hospital, Dr. Peace Ighosewe to offset medical bills of 28 patients in the Hospital on her visit as part of activities to mark the 2022 world Charity Day celebration while the chief whip of the State House of Assembly, Hon. Princess Pat. Ajuduah (PIX: NORBERT AMEDE)

“Expressing concern for someone is another way of showing love and not necessarily giving money to somebody. I want to thank the governor’s wife for her kindness to people who are less privileged.

“She is under no obligation to do what she is doing. She goes out of her way to help people. I pray God will continue to bless her and as he blesses her she will do more for people in society.

“Over time we’ve seen that they don’t have the money to pay. On that basis we made selection. Some have been here for up to three months. They cut across those with legs cut off due to accident, fire burns, domestic accident, and premature birth and kept in incubator for months.”

A mother of one of the babies, Mrs. Helen Nwabueze, expressed appreciation to the governor’s wife after paying bills for her child’s treatment. She told journalists that she never expected the good gesture of the governor’s wife.

The Chief whip, Delta State House of Assembly, Hon. Princess Pat. Ajuduah (Middle) presenting a cheque of 500,000 Naira to a father blessed with triplet, Mr. Lucky Monday to offset his bills on behalf of the wife of the State Governor and Founder O5 Initiative, Dame Edith Okowa as part of activities to mark the 2022 world Charity Day celebration while the Director-General of the O5 Initiative and Permanent Secretary ministry of Women Affairs Community and Social Development, Mrs. Oghenekevwe Agas watches (PIX: NORBERT AMEDE)

She said: “I’m so happy and excited. Her Excellency came to the hospital and remembered me and my son. She paid our bills. I didn’t expect it to come like that. We came here August 12. My child has hole in the heart. We have been discharged but the money is so much for us to pay.

“Every one hour we spent was N1000 with oxygen. For her to remember me God will bless her. I’m from Enugu state, not a Deltan. I’m a corps member serving in Delta state in Oshimili south local government council. I like Delta state. I’ve never experienced this before.  I don’t know whether my state is doing this but I want all states to emulate Delta state.” one of the recipients said.

The International Day of Charity was declared by the United Nations in 2012 to be celebrated September 5 every year. The prime purpose of the day is to raise awareness and provide a common platform for charity related activities all over the world.

It was established with the objective of mobilising and sensitizing people, NGOs and stakeholders all around the world to help others through volunteer and philanthropic activities.

September 5 was chosen to commemorate the anniversary of the passing of Mother Theresa of Calcutta who received the noble prize of peace in 1979 for work undertaken in the struggle to overcome poverty, and distress which constitute threat to peace.