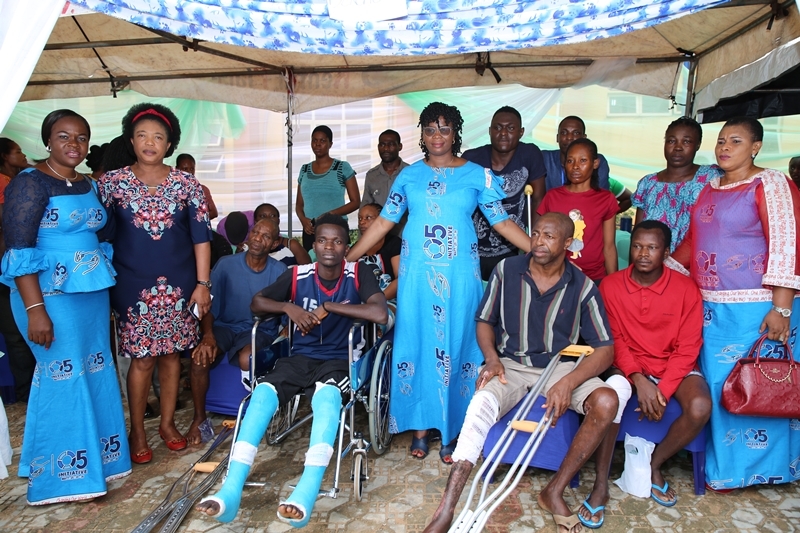 As part of the International Day of Charity 2019, medical bills worth N5.9million of 23 patients at the Federal Medical Centre (FMC) Asaba, have been defrayed by the O5 Initiative, a Non-Governmental Organization (NGO) championed by the wife of the Delta State Governor, Dame Edith Okowa.

The rescue mission of stranded patients which is one of the focal points of the Dame Okowa’s O5 Initiative, saw the presentation of the cash payment to the management of FMC Asaba at a colorful event which took place on Thursday, September 5, 2019.

Rejoicing with the beneficiaries made up of young and old individuals including nursing mothers from within and outside the Delta State, Dame Edith Okowa, reiterated the need for all to be their brother’s keeper and join hands to change the world, one person at a time.

The First Lady, represented by the wife of the State Deputy Governor, Engr. Dr. Ebierin Otuaro while making the cash presentation to the Chief Medical Director (CMD), Dr Victor Osiatuma, charged political appointees, employees of government and private organizations, as well as high-net worth individuals to contribute to the welfare of sick persons, orphans, the poor and needy in the society.

Babies and Nursing Mothers discharged by O5 Initiative on International Day of Charity 2019 at FMC, Asaba

“We have the needy around us, some are faced with various health concerns and cannot afford to buy drugs or pay their hospital bills. Many children are roaming the streets due to their parent’s inability to pay their fees. The International Day of Charity is not solely for the O5 team, it is for everyone; there is something you can do. There is somebody you can help. You may not have so much to give; a word of encouragement, feeding the hungry and other notable humanitarian gestures are all it takes.”

Being inspired by the legacies of Mother Theresa of Calcutta who worked tirelessly to reach out to the poor, the First lady said that the International Day of Charity is a great opportunity to raise awareness and provide a platform to carry out charitable works. “That is why we are cashing in to contribute our quota to humanity. The word of God propels us to carry out our mission to care for the sick as recorded in Matthew 25:35-36”. Dame Okowa thanked donors and supporters of O5 Initiative for their financial commitment, imploring them not to relent.

She commended the management and staff of the Federal Medical Centre for partnering with the O5 Initiative and eulogized CMD Osaituma for using the medical facility to give hope to the common man, saying, “you do not bore them with payments before treatment, you render services to them to keep them alive. Man can only appreciate you but God will reward you abundantly for this show of love”.

In his speech, the CMD of FMC Asaba, Dr Victor Osiatuma conveyed the appreciation of the management and staff of the hospital and, of all patients to the State Governor, Senator Dr Ifeanyi Okowa and First Lady, Dame Edith Okowa for their love and immense contributions to the medical facility.

According to Osaituma, “It is our impression in this hospital that our own mother of Delta State, Her Excellency, Dame Edith Okowa has always worked in the true sense of Mother Theresa’s kindness and virtues to the helpless. We have on record numerous philanthropic gestures and developmental activities herself and her husband, His Excellency, Senator Ifeanyi Arthur Okowa, Governor of Delta State have contributed to the growth of our hospital. We can only pray that God will continue to bless this family and the works of their hands”.

Speaking on behalf of the discharged patients, Mr James Mordi, who hails from Onicha-Olona, thanked the O5 Initiative for coming to their rescue and prayed God to reward the gesture of the First Lady. He further appealed to well meaning Deltans and Nigerians to show same kindness to other patients who were not privileged to benefit from the 2019 World Charity Day.

In an interview with 26 years old victim of car accident, Mr Mordi narrated that, he was employed as a casual driver at a new generation bank in Lagos when he got involved in a ghastly crash which happened on May 5, 2018. explaining that, he was thereafter admitted to Ikorodu General Hospital where he spent 7 months and was then referred to FMC Asaba. Having spent N350,000 in Lagos, he was admitted into FMC Asaba on December 5, 2019 and was discharged 4 months ago but had been unable to pay his outstanding medical bill of N717,150 which was graciously captured in the N5.9 million donated by O5 Initiative.

The O5 Initiative celebration of the International Day Of Charity at the FMC Asaba which started in 2017, have witnessed the offset of medical bills of 13 indigent patients totaling N4.5million while in 2018, the sum of N5.12m was donated which secured the discharge of 22 patients.