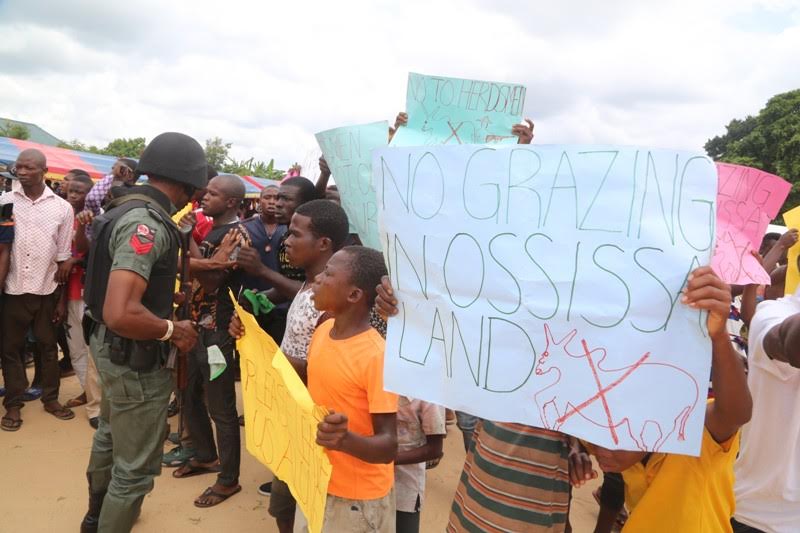 The Delta State Online Publishers Forum (DOPF) has called on the State Governor, Sen. Dr. Ifeanyi Okowa to show firm commitment to the protection of lives and properties of her citizens stating that it is the number one priority of all established government.

In a statement titled, “Insecurity: DOPF Charges Okowa to Show Firm, Decisive Leadership”, the state government was called on to urgently address the alarming security situation in Ethiope East, Ndokwa East and Ughelli North as a result of Fulani herdsmen activities, and the cases of communal crises resulting from land disputes in Ukwuani and Udu Local Government Areas noting that the situation is currently affecting the social and economic lives of the people and state.

The statement which was signed by the Chairman of the forum, Mr Emmanuel Enebeli and Secretary, Mr Shedrack Onitsha after her meeting in Kwale, Ndokwa West Local Government Area of the state said that the frequency of mindless killings by suspected Fulani Herdsmen of farmers in the state, whose only offence was going about their lawful business, has become worrisome and needs urgent intervention by the government.

“Deltans, particularly farmers are been harassed, brutalized, terrorized, maimed and traumatized on a daily basis by the ravaging herdsmen and it appears that there is conspiracy of silence from the security agencies who have failed to act decisively to check the activities of these criminals posing as herdsmen”, they stated

On the issue of land dispute in some communities of the state, the forum reminded the state government that a permanent solution needs to be taken to avert future occurrences by ensuring that the boundaries are properly defined and demarcated and sanctions placed on future violators of such agreements.

The forum while condemning in its strongest terms, the open dereliction of duty by the security agencies in the state, in failing to stop the cold blooded killings of unarmed Deltans, but are quick to react should the villagers protest against the killings by the Fulani herdsmen, called on the state government under Senator (Dr.) Ifeanyi Okowa to rise up to the occasion of protecting the lives of her citizens, adding that all necessary actions that will give the people the sense of belonging need to be taken urgently and as a matter of great security importance.

According to the statement, “It seems that someone is acting out a script, because the helplessness of the security agencies, particularly the Police and the Army to bring to book those behind the killings of farmers in Ethiope East, Ndokwa East, Ughelli North and, other places is inexcusable”.

DOPF reminded the Governor that as the Chief Security Officer of the State, his primary responsibility is to ensure that Deltans are secured.

“We therefore call on the Delta State Governor, Dr. Ifeanyi Okowa, who is the chief security officer of the state, to rise up and tackle the barrage of security challenges that have made Deltans to now sleep with one eye open.

“The primary responsibility of any government is the protection of lives and properties of citizens, and Deltans expect nothing less from Governor Okowa and unless the government acts now, Deltans may be left with no other option, but to resort to self help,” the statement warned.

The body said that the best the government can give to Deltans as she marks second year in office is to show that the state government is on top of the situation by exhibiting firm, decisive leadership, as most high profile kidnapping and killings are traced to the herdsmen.

“We believe that the state governor can show leadership by according the herdsmen killings in Delta the seriousness it deserves, since it has been proven that most of the high profile kidnap in the state are carried by these herdsmen”.

The group equally urged Governor Okowa to give more attention to the frequent communal land disputes, armed robbery incidents and other security challenges in the state, as the lack of will power to tackle these problems will make the prosperity for All Deltans mantra, as preached under the SMART Agenda, a wasted venture.