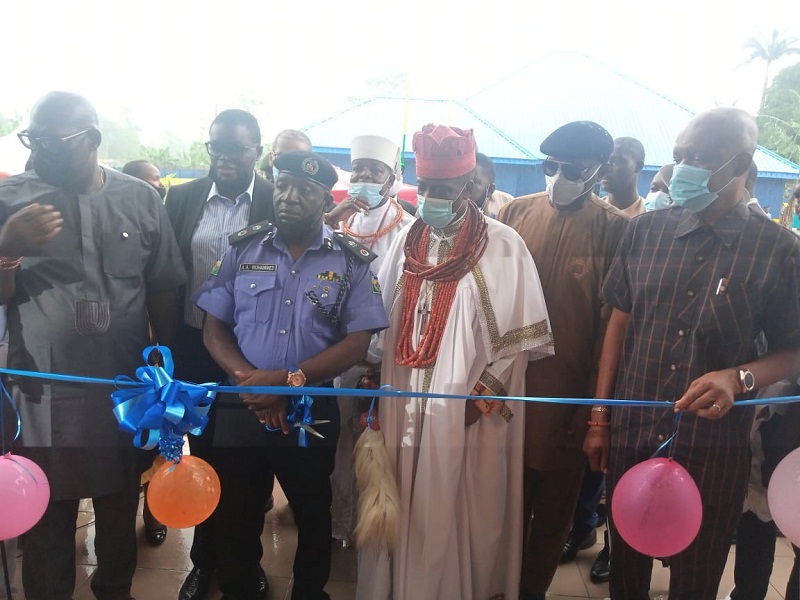 The Sapele Okpe Community/NPDC and SEPLAT Joint Venture has built and donated an Area Command Headquarters to the Delta State Police Command in Sapele, Sapele Local Government Area of the State.

The facility was handed over to the Inspector General of Police, IGP Alkali  Baba Usman who was represented by the Commissioner of Police, Delta State CP Ari Muhammed Ali on Thursday, August 26, 2021 by the Chairman of Sapele Okpe Community, Dr Patrick Akamovba in Sapele town.

Speaking during the handover ceremony, the Chairman of the community, Dr Akamovba said that the station was built to enhance security of life and property in Sapele and its environs, noting that security is paramount.

He thanked the Orodje of Okpe, HRM Felix Mujakperuo, Chief Ede Dafinone and other Okpe leaders for their contributions to the project, expressing determination and commitment towards transforming the area through projects that have a direct impact on their lives.

The Orodje of Okpe, HRM Felix Mujakperuo, Orhue 1 who spoke at the event, called for the establishment of another police station in the locality to curb crime narrating that the only police station in the town was built before Nigeria’s Independence and had not adequately served the community. He thanked the IGP for giving approval to build the Area Command Headquarters in Sapele, while noting that security was paramount for every local government area, and that the local government will work in synergy with the police and other security agency to help curb crime in the locality.

In his address, the member representing Sapele in the Delta State House of Assembly, Hon Felix Anirah commended the community chairman for the project, saying that the gigantic project would have scared some persons away, but he was able to complete it. He called on others to contribute their quota towards making Sapele safe.

In his response, the Inspector of Police while commending the community for the donation of the building, said the realization of the project was a typical example of what you can do for the country not what the country can do for you, saying the crowd would not be sitting comfortably if there was no security.

“Security is a collective responsibility, all of us are stakeholders when it comes to the issue of security, that is why it gladdens my heart that we have this one here, if you have problems bothering on security, you cannot call another person than the police” adding that it is proper the police have an edifice like this one”

He promised that the police will ensure proper utilization and maintenance of the station.