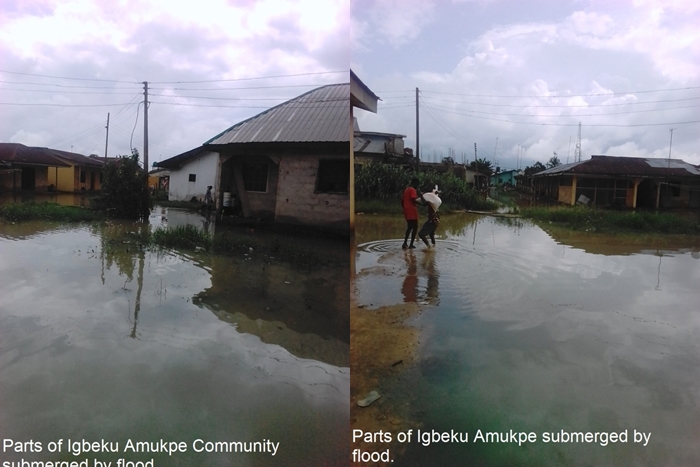 Forum of Landlords and tenants of Igbeku-Amukpe Sapele, others wise known as (Vitaform Village) in Sapele Local Government Area of Delta State, whose homes were submerged by a ravaging flood during the torrential rains of first and second weeks of August, have sent a Save Our Souls (SOS) message to the Governor of Delta State and others.

Representative of the Landlords and tenants Forum, Mr. D.O Oteme who addressed journalists in the area, said prior to the raining season, the tenants and landlords of about 10,000 population were all leaving in harmony before the ravaging flood which has relocated many of them to friends and family homes in neighouring towns and village waiting for the dry season to come, noting that schools, business centres, churches, mosques, collage industries, poultry farms etc were all affected.

Mr. Oteme maintained that the people that have been leaving peacefully, are now ecological refugees in their homes and as a result of this, the economic life of our people have been paralyzed as they are now loafing about because of the disaster that occurred adding that they are sending this SOS message to the Governor of Delta State Senator Dr. Ifeanyi Okowa, their amiable governor.

He noted that it was during the construction of Ogaga road Amukpe that worsened the fragile situation. “The road construction added insult to our injury because of structural defects of the job from the drainage at the Eku road Axis as a result of the channelization of that road”.

He further stated that “the drainage bed was shallow and the drainage valve could not swallow the flowing water, but the pedestrians lane of the drainage is okay. Sometimes the work of the contractors and materials involved are not good enough, as the rods are like water cane, size and depth are not okay. Now the panacea to this is an urgent drainage to be constructed to link up the main drainage channel, to channel the water to River Ethiope from Igbeku”.

He added, “although we were made to understand that sometimes this year, there was a master plan survey with the intention to give the Igbeku Inhabitants a one side drainage from Oando filling station Amukpe to Camp-Okwori in Amukpe Community, he noted just like Oliver Twist that asked for more, that one side drainage will not be the panacea to the perennial flooding of the area each year”.

The people therefore called on the commissioners for environment and works, the local government chairman Hon. Omizu Odebala, Special Advisers to the Governor, Mr. Benson Okoroduolu and Mr. Eugene Unuagba, the state PDP Chairman, Chief Kingsley Esiso, Hon. Joyce Overah, commissioner for science and technology and Hon. Austin Ayemidejor, to urgently come to their aide and that before any payment is made for any job done, the job should be commensurate with their payment.

He explained further that a certificate of approval should be obtained from the 25 LGA chairmen who are representatives of the governor to better the lots of Deltans, appealing that as the job is presently progressing at the Amukpe, they should immediately commence on the side drains which the government have promised them, as they will be grateful if it is embarked upon.

Other landlords in the area who spoke to the press remarked that they have always been in support of Governor Okowa and will continue to be there for him because they know that he will always listen to their plight.