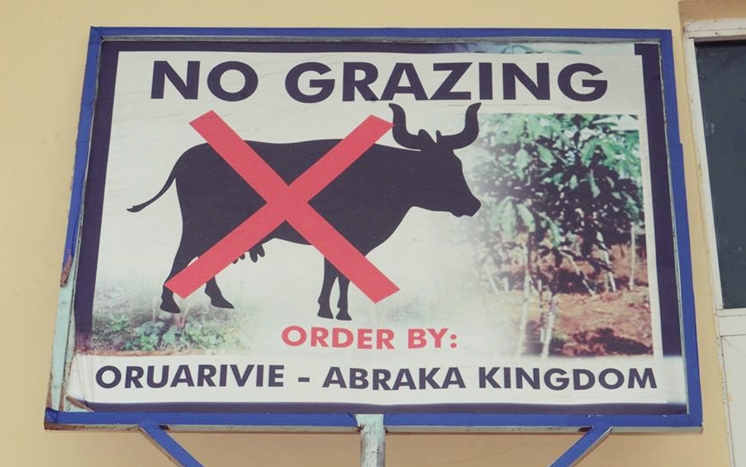 Honourable Member Representing Ethiope East State Constituency in the Delta State House of Assembly Hon Evance Ochuko Ivwurie has called on the President of the Federal Republic of Nigeria, His Excellency, President Muhammadu Buhari, the Inspector General of Police, the Director General of State Security (DSS) the Chief of Defence Staff and heads of other security agencies to come to the rescue of Ethiope East over the incessant killings, Kidnapping, rapping and destruction of farmland by Fulani Herdsmen in Ovre R’ Abraka/Eku/Igun by Ak47 Rifle-wielding Fulani Herdsmen.

Hon. Ivwurie stated this recently during a World Press Conference held at the Palace of Ovie of Oruarivie-Abraka Kingdom, HRM Akpomeyoma Majoroh, Ojeta II, at Abraka.

In the world press conference, titled ‘Yet Another Incidence of Killing in Ovre R’ Abraka/Eku/Igun. Hon. Ivwurie said it is with sadness that I call upon President Buhari to stop the unwarranted and provocative killings of our kinsmen by AK47- armed Fulani Herdsmen.

The lawmaker stated that the people of Ethiope East have kept their records, documented and have regularly in the past dutifully reported tens of incidences of killings, Kidnapping, raping and destruction of farmlands by these invading Fulani Herdsmen to the Federal Government, the Nigerian Police and other security agencies, yet no single person has been prosecuted and no action has been taken to investigate any of the killings and to save the lives of my constituents”.

He faulted the claims by the Delta State Police Public Relations Officer (PPRO), Mr. Andrew Aniamaka that the Ovre R’ Abraka is temporarily inhabited by a minimal number of herdsmen and that the herdsmen are living peacefully with the Abraka communities as a fat lie.

Hon. Ivwurie asked, does it mean that those who invade our farmlands, destroy our crops and kill our people are GHOSTS? Our farmers are dead scared to venture into their farmlands which is occupied by over ten thousand cows and over two thousand Fulani Herdsmen with sophisticated weapon, our farmers and people are afraid to carry out farming activities which has resulted in shortage of farm produce and increase in the prices of farm products.

The Police Command and DSS have neither visited the areas to see things for themselves nor investigated any of the gruesome killings, maiming, kidnapping and raping cases reported by my constituents.

According to him, “Ethiope East Local Government lands are arable, quite fertile and the Constituency remain very peaceful. We have very serious business in our hands; this matter must be in the front burner and we call on the Federal Government of Nigeria to come to our aid. These invasion by the Fulani herdsmen and annexation of our land by Presco Plc cannot push us out of our God’s given and sacred land. Our right is our right and we are ready to do everything possible to protect the rights of our constituents”.

This is the sad story of Ethiope East people today. The most painful thing is to live a life that you don’t want to live.

Hon. Evance Ivwurie with the Families of Dead Victims from the Fulani-Herdsmen Menace in Abraka

“As I speak, my heart is bleeding; I am shedding tears struggling to hold back. I saw this morning many victims families and children whose fathers and mothers have been killed by the herdsmen, children without fathers and mothers, wives without husbands and husbands without wives, children whose parent went to their farm and never returned back as a result of been killed by these blood sucking Fulani herdsmen in their own ancestral and sacred land,” Hon. Ivwurie reiterated.

Hon. Ivwurie challenged the Media, stating that the media as the strongest force in the society has the legitimate duty to escalate the killings and developments in Ethiope East and the conspiracy of silence by the Federal Government and the Nigerian Security Architecture to the whole world. “I challenge the Nigeria Press as a world class media to please expose and inform the world about the happenings, killings, Kidnappings, rapping and attacks as well as the conspiracy of silence by the President and the Nigeria Security agencies in my constituency”. Hon. Ivwurie screamed; ‘enough is enough’ while calling on the security agencies to go into the Ovre R’ Abraka/Eku/Igun to see the destruction of our farmland and crops worth tens of millions of Naira.

According to Hon. Ivwurie, “To our surprise the Police, SSS and other security agencies are saying that they are scared of their lives unless there are hundreds of mobile police men and soldiers they cannot go into Ovre r’Abraka/Eku/Igun because of the type of equipment, guns, and sophisticated weapons that the Fulani herdsmen in their number are parading in our farm land which they have turned to SAMBISA FOREST”.

Hon. Ivwurie made it clear that our people should stop blaming the Delta State Government and Governor Okowa out of ignorance. “Let me make it abundantly clear that the Governors of the Southern and middle Belt States of Nigeria are extremely limited over this issue. The truth is that the State Governors have no control over the Police, Army, DSS, Navy or Airforce and as you all know the President is a Cattle Rearer.

So stop situating the solution with the Governors, we all have come to identify the symptoms and the solution is so obvious to the extent that we must stop begging the issues. Our President must have a change of heart towards this issue at least for the sake of my constituents

Okakuro Emudainohwo also said that the government should immediately send a combine team of military and mobile police squads to flush out the recalcitrant AK47 armed Hausa/Fulani Herdsmen from our land.

According to the President General “Government should establish a permanent military and police posts in the area to protect our farmers from these barbaric activities of these herdsmen and government should immediately set up a Commission of inquiry to investigate the source of flow of arms, ammunition and weapons carried by these herdsmen.