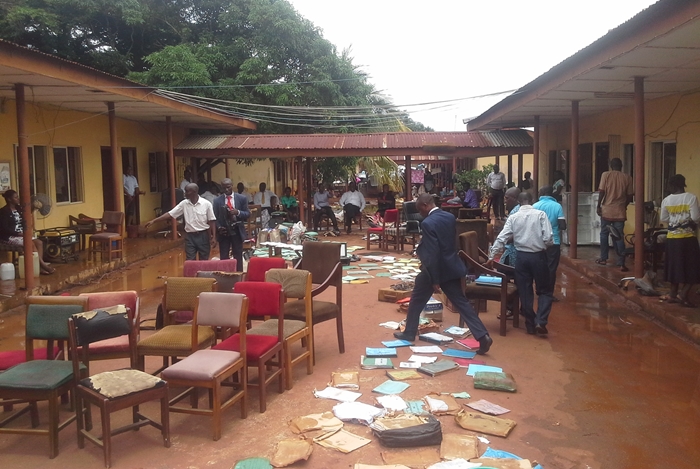 The Delta State Head of Service, Mr. Regina Bayoko today paid an on-sight tour to the Delta State Old Secretariat Complex to ascertain the level of destruction caused by the floods which occurred over the weekend.

The government facility which houses several establishments, annexes and political offices, submitted to the rage of the flood perpetually holding sway in the state capital.

Mr. Bayoko who was taken aback at the level of the destruction caused by the flood, decried the inevitable loss of government property. “If you look at me, my face is very downcast because usually I always wear a very big smile but sadly today I’m wearing not a frown but a non-smile and it is just a reflection of what we have seen and it calls for sober reflections. What we have seen now might sound absurd or a bit ironical but the truth is perhaps it is God’s message for us to be stronger and do the right thing and the needful thing. What it also means is that it is a test of leadership not just for His Excellency but for all of us in the bureaucratic process and for all of us who are also in this complex because I have seen the level of destruction that has been unleashed by the flood.”

The Head of Service however commended staffers of the various ministries for the efforts made so far in rescuing partially damaged materials and expressed hope for some documents destroyed stating that some of them may have been logged into the computer.

‘So my message here is which have been conveyed even in the serious mood and in the lighter mood is that, forget what we have seen, let us react in a positive way to ensure that we can get the best out of the situation. I will call on you to rally round, don’t worry yourself, we have seen plenty of documents that have been damaged and all the rest but good enough, the bureaucracy works in a way that to a large extent even though we cannot say complete 100%, many of the documents we have that appear seemingly lost, are backed up somewhere in the system and by God’s grace, let us get the ones that we have seen and we will try to retrieve the ones that we might not see.

I will also thank many of us who have provided ample clarification to how this flood destruction emerged because the first question I asked when I got here was that, how did this, it has never shown this sign that it can be so devastating but we realized that there was a wall that collapsed based on the channeling problem and nature as well.”

Head of Service, Mr. Reginald Bayoko (M) on a sight tour of the Secretarait

Investigation revealed that the flood which quickly ravaged the secretariat complex when some quarters of its perimeter fence crumbled was due to absence of proper drains in the capital city.

Business owners who turned up for the day’s activities, were seen counting their losses and regular government activities were grounded due to countless destruction of official documents and properties. Government workers were also seen salvaging what was left in their various offices.

Although most of the workers who silently chorused “make government relocate us comot here” denied public interview, a top official in the worst hit Ministry who does not want his name in print said that, there have been reports forwarded to the state government of a possible flood disaster occurring in the secretariat but no step was taken.

One of the Flooded Offices

“We have made several reports about major cracks in the fence, but we did not see any positive response. This destruction could have been prevented if a proactive action was taken. This crack also led to the near theft of an armoured cable of the Delta State Printing Press in this Secretariat”.