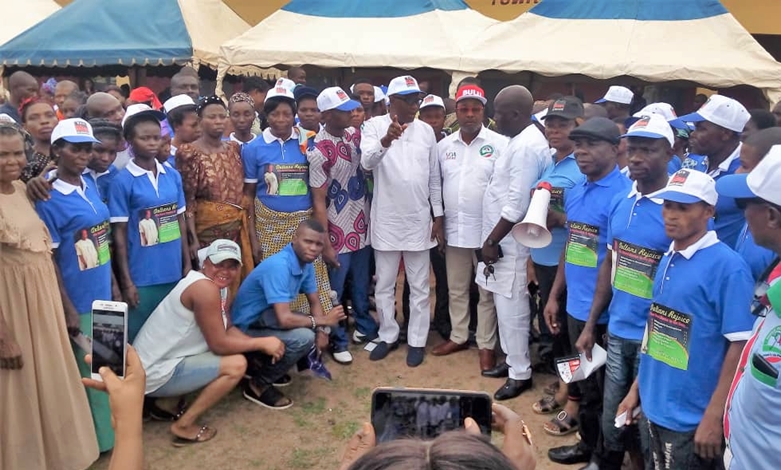 In continuation of its sensitization and mobilization of the electorates, tagged “Get out the Vote” for the forthcoming Governorship and State House of Assembly elections in Delta State; a political support group passionately rooting for Governor Ifeanyi Arthur Okowa and its second term bid as governor of Delta State, The Good Doctor Movement (TGDM) has called on the electorates in Delta State to come out en masse to vote the peoples governor, Governor Ifeanyi Okowa on Saturday, March 9, 2019.

The Convener/Chairman of the group, Mr. Greg Uzodimma Monyei, who made the call on Wednesday, March 6, 2019 during an engagement with non-indigenes resident in the hinterland of Akwukwu-Igbo, Ugbolu and Illah respectively, said that Governor Ifeanyi Okowa has done creditably well and even much more for Deltans than any other governor in less than four years of governance. “It is only natural for Deltans to reciprocate the good work of our resilient and working governor by voting massively for Governor Ifeanyi Okowa comes Saturday and put the agents of disunity and backwardness to shame”.

The Chairman stressed that Governor Okowa has redefined governance and practically changed the general outlook of Delta State for good with the massive deployment of social and economic infrastructures, including roads constructions linking up different parts of the state/neighbouring states and job creation among others. “So we need our governor to continue for the next four years, so he can consolidate and complete his good work for the good of all Deltans” Mr. Monyei declared.

Mr. Tony Okowa, Chairman, Delta State Sports Commission and the special guest of honour highlighted the importance of voters’ civic responsibilities and all inclusive engagements of Nigerians as a way to deepen our democratic process. He extols the virtues of Governor Ifeanyi Okowa, who he said is a listening governor and very determined to leave positive footprints of his name on the sand of history in Delta State and Nigeria in general. He therefore challenged the electorates to come out in their large numbers to vote Governor Okowa for more outstanding leadership and good governance for the prosperity of all Deltans.

Speaking further, Okowa admonished the non-indigenes to stop alienating themselves from their community of abode, but rather to see themselves as part and parcel of the community by joining hands in the governance and development of their communities for sustainable growth.

He however decried the low turnout of voters in the last Presidential and National Assembly elections particularly in the hinterlands within the State, and urged the people to honour their civic obligation with their votes on Saturday and to vote for His Excellency, Sen. Dr. Ifeanyi Okowa for a well-deserved second term as Governor of Delta State.

Expressing their appreciation for the visit and opportunity provided for interaction, the leaders of the non-indigenes took turn to thank the delegates as well as eulogize His Excellency, Sen. Dr. Ifeanyi Okowa for his purposeful leadership which has engendered peace and development leading to peaceful coexistence among the diverse groups in Delta State. Accordingly, the leaders of all the ethnics groups pledged their total commitments to the re-election of Governor Ifeanyi Okowa come Saturday. “You can rest assured that the turnout for Saturday’s Governorship and State House of Assembly elections will far exceed that of the last Presidential and National Assembly elections”.

“We are voting our Governor Okowo and his reelection the second time is our collective project”. All the leaders and the people present at the event chorused.