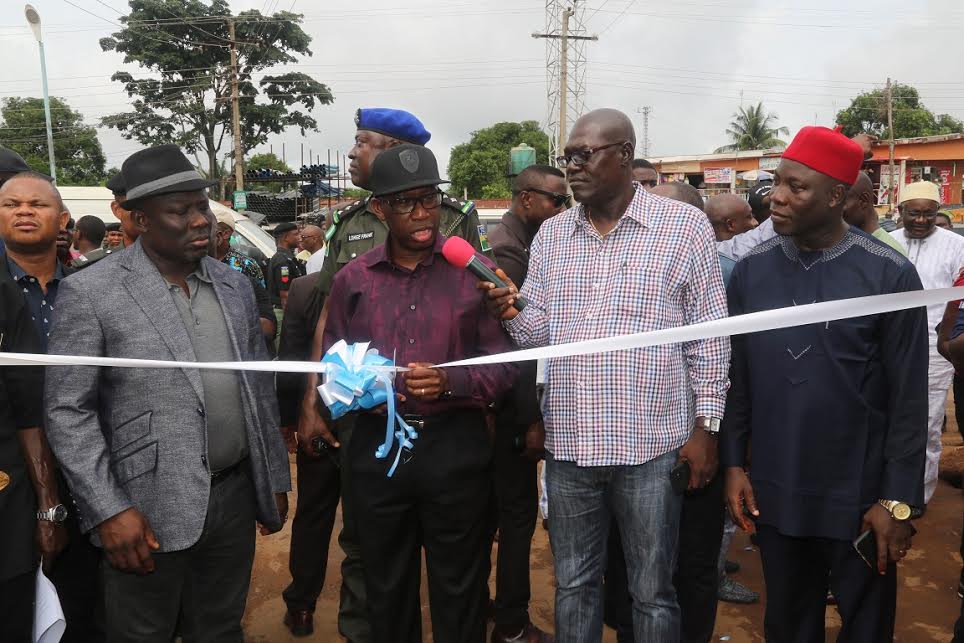 Residents of Asaba were Today agog as Delta State Governor, Dr. Ifeanyi Okowa commissioned 12 new roads and streets in the Old Asaba Metropolis fulfilling his promise of Urban Renewal in the State.

The governor who was accompanied on the commissioning tour by the Speaker of the Delta State House of Assembly, Rt. Hon. Sheriff Oborevwori, the State chairman of the Peoples Democratic Party, Barr. Kingsley Esiso, members of the State Executive Council, Honourable members of the Delta Assembly and other political office holders, made his first call at the Palace of the Asagba of Asaba to inform of his activities within the Town.

At the Asagba’s Palace, Governor Okowa and his entourage were warmly received with an appreciative speech by the Palace eulogising the State Government’s positive developmental efforts to renew  the Town.

“We are appreciative of the inter connecting roads that will decongest traffic on the ever busy Nnebisi Road especially the rehabilitation of Isioma Onyeobi Way. We also appreciate you for approving the construction of the problematic DLA Road and Jesus Saves Roads. These are eloquent testimonies that your are ready to transform Asaba and indeed Delta State in spite of the dwindling resources.”

The palace also commended the governor for the various political appointments offered Asaba Sons and Daughters.

Presenting the newly constructed roads to the Governor for commissioning, the Director General of the Delta State Capital Territory Development Agency, Chief Clement Ofuani said the completion of these projects, once again, underscore the fact that His Excellency lives up to his highly revered title of EKWUEME.

He said, “Since the inauguration of this administration on May 29, 2015, His Excellency, the Governor has embarked on massive Infrastructural development in fulfilment of the Transformed Environment through Urban Renewal aspect of his SMART agenda towards delivering prosperity for all Deltans. A critical component of this agenda is road construction aimed at giving our capital territory a modern look that is aesthetically appealing and functionally supportive of socio-economic activities that translate to improved well-being for our people.”

Governor Okowa congratulated the management of the Capital Territory Development Agency and the ministry of works for being able to deliver on the 12 roads constructed within the township.

The twelve (12) commissioned roads were awarded between November and December 2016 at a total execution cost of One billion, Forty-three million, Two hundred and Nine thousand, Six hundred and Ninty-six Naira Eighteen kobo (#1,043,209,698.18), totalling 6,435 meters in length with side drains and walkway where appropriate.