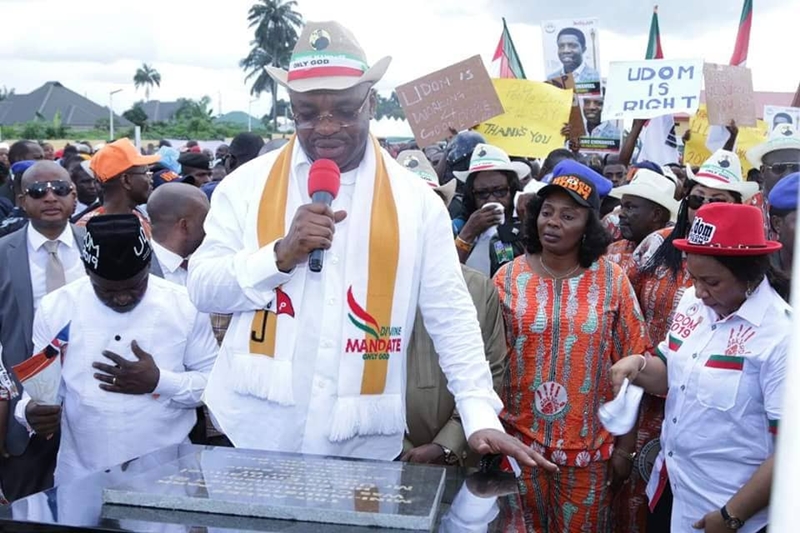 Creating Industries and attracting investors in difficult times, remain pointers to the ability of a leader to manage resources and bring about optimal result in all situations.

Governor Udom Emmanuel said the industrial park which is the first in the state, was just the beginning of many of such concerns that he is bringing into the state.

He dismissed those who play down on the ingenuity brought to bear in the establishment of the industries in the state, maintaining that it was not possible to find any such industry before his administration arrived in 2015.

“We are doing very well. I promised the youths that we will work towards developing cottage industries to bring back memories of the past where several products like shoes, newsprint, and steel, were produced in this country.”

Governor Emmanuel said that several cottage industries in the country were forced to close down because of the low patronage from Nigerians, maintaining that his administration has created the cottage composite industry to fast track development and create employment.

He thanked Elder Ufot Ebong and his team for the efforts in translating the vision, and also appreciated the community for the support to the realization of the project.

He said he was not moved by the criticisms on the social media by the opposition, maintaining that the unveiling of the projects usually silences them.

“Some months ago when we told them of our intention to bring a flour industry into our state, and stop the hardship our people encounter in getting it from other places, some people said we were lying. Three days ago, I went and inspected that flour mill which will produce enough flour to feed the entire state. Have they not been put to shame?”

“I had set for myself a target, that before we leave office, eighty percent of what we eat, shall be produced in the state; even bread, and that is why we have the flour factory.”

He also recounted his investments in the development of the power sector in the state, that earned him the commendation of the Minister of Works, Power and Housing, Babatunde Fashola

Speaking, the Senior Special Assistant to the Governor on Technical Matters and Due Process, Elder Ufot Ebong said he and his team were mandated through AKEES to device means of getting young people out of the streets and into work.

He admitted that cottage industries  are the main drivers of the economy in developed economies.  He said within the last four months, no fewer than 100 people have worked at the factory on each day.

He said the quality of products in the factory were very high, such as the Hydro form blocks which he said has a lifespan of over 150 years.

Also speaking, the Chairman of Itu local Government Area, Barr. Etetim Onuk said the Governor had showed so much love to his people, and counted the new school sports center in Itam, the Etak Itam Market intervention, Ikpe Enwe-Afaha Ube road and other numerous roads as well as the industrial park.

He said his people have enormous reasons to align with the vision of the Governor in the state and assured of maximum support for the re-election of Mr. Emmanuel.