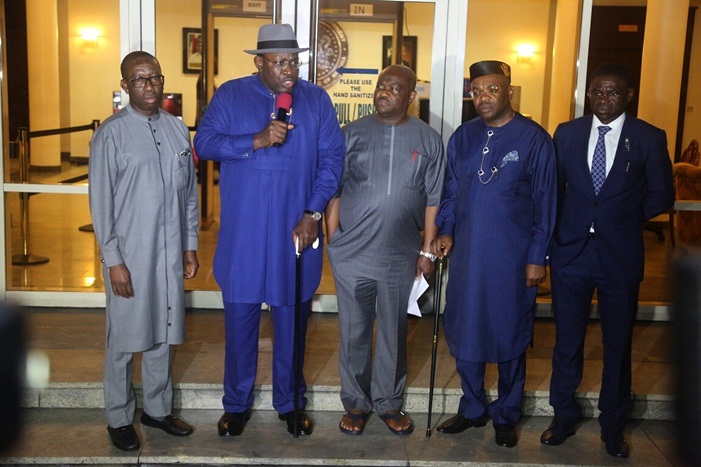 Governors of the South South states have thrown their weight behind restructuring and devolution of power, saying such will lead to a more peaceful and prosperous nation.

Briefing journalists after the meeting, Governor Dickson said far-reaching decisions that will be of benefits to the people of South-South region and the country were taken.

According to him, “everyone is aware of the ongoing clamour for devolution and a return to essential founding principle of this great country and we, in our meeting resolved as we have been speaking over sometime that we associate fully with the clamour for restructuring, true federalism and devolution of powers that are so concentrated at the centre to the federating units. We have agreed to support ongoing moves in that direction by working with like-minded Nigerians who mean well for the country so that we can all have a stable and prosperous and peaceful nation.”

He also stated that “while we are not against the withdrawal of 1 billion dollars from the Excess Crude Account by the Federal Government for national security, we believe that such should be done by adhering strictly to constitutional provisions of paying 13 per cent derivation”.

Dickson said, “we took the collective view about the efforts of the Federal Government to withdraw 1 billion dollars for national security expenditures, our position in this zone is that in line with the constitutional provisions of derivation, while we have no objections to the Federal Government spending money on national security including the security of this zone, we believe that the constitutional provisions of 13 per cent derivation must be applied and fully respected and we will communicate that to the appropriate authorities so that whatever amount that is withdrawn from the Excess Crude Account, being proceed of crude oil sale is subject to the 13 percent principle enshrined in the constitution.”

“We also agreed that the bill currently making rounds in the National Assembly which we understand is an Executive Bill on management of water resources; we are of the view that the provisions of the bill are offensive and obnoxious,” the Governors resolved, adding, “we disagree with the centralized control of water resources as we are already dealing with the problem associated with over centralization of our country and we have agreed that the bill should be immediately withdrawn by the Federal Government and further consultations be made on that.”

He disclosed that “because of the nature of the discussions we have had, we also invited the Attorney-Generals of the respective states to be in attendance and we had very fruitful deliberations touching on critical national issues that affect the wellbeing and welfare not just of our country, but principally, the life of people of this zone.”