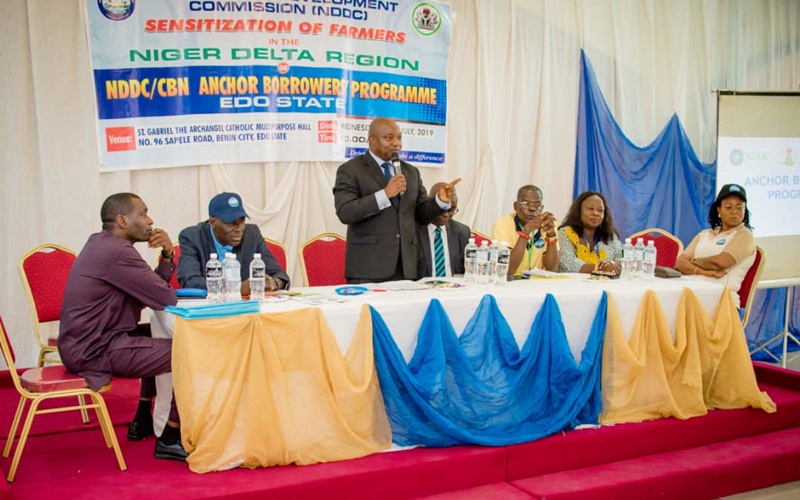 The Niger Delta Development Commission, NDDC says it will continue to key into policies and programs that would enhance food security and poverty reduction in the states under the purview of the Commission.

The Acting Managing Director of NDDC, Prof Nelson Braimbraifa who stated this in Benin City, Edo State during the sensitization of rural farmers on the CBN’s Anchor Borrowers’ Programme, said the Commission embraced the program as it was in line with the policy thrust of the NDDC in the Agricultural sector.

“The NDDC appreciates the Anchor Borrowers’ programme of Central Bank of Nigeria as it is consistent with the goals and objectives contained in her development MasterPlan and therefore support it for implementation in the NDDC states. The program which was launched nationwide in November 2015 is yet to make any significant impact in the Niger Delta region due to low level of awareness. It is for this reason NDDC considered it appropriate as a development partner to sensitize farmers about the laudable program”.

Prof Braimbraifa whose address was delivered by the Edo State Coordinator/Liaison Officer of the Commission, Hon Saturday Idehen Uwuilekhue, said ” farming in the Niger Delta region is significantly practiced at subsistence level with most farmers resident in the rural areas. They lack financial resources and technology for mass food production to sustain the growing population in the region. Their plight is further made worse due to poor access to credit facilities. The NDDC as an interventionist agency has to come in to bridge the gap”.

The NDDC boss stated that the aim is to promote food security and improve incomes and living standards of the rural farmers, even as he enjoined participants to grasp the details of the Anchor Borrowers’ Programme to be able to access agricultural credits from the participating banks.

The Director, Agriculture and Fisheries, NDDC, Barr George Ero while welcoming participants to the sensitization program, restated the commitment of the Commission in developing the agricultural sector in the Niger Delta region.

“NDDC has made giant strides in the promotion of agricultural development through the implementation of entrepreneurial skill development program among youth and women, disbursement of micro credit facilities to NDDC trained farmers, procurement and distribution of tractors and fishing tools for farmers and fisher folk respectively in the region”.

He disclosed that the thrust of the Anchor Borrowers’ Programme is the provision of farm inputs to small holders farmers to boost production, stabilize inputs supply to Agro-processors and address the nation’s negative balance of payments on food.

Barr Ero expressed gratitude to the management of the NDDC for the demonstration of commitment and passion towards agricultural development in the Niger Delta region.

Some participants interviewed commended NDDC for the program and promised to make judicious use of the knowledge gathered.